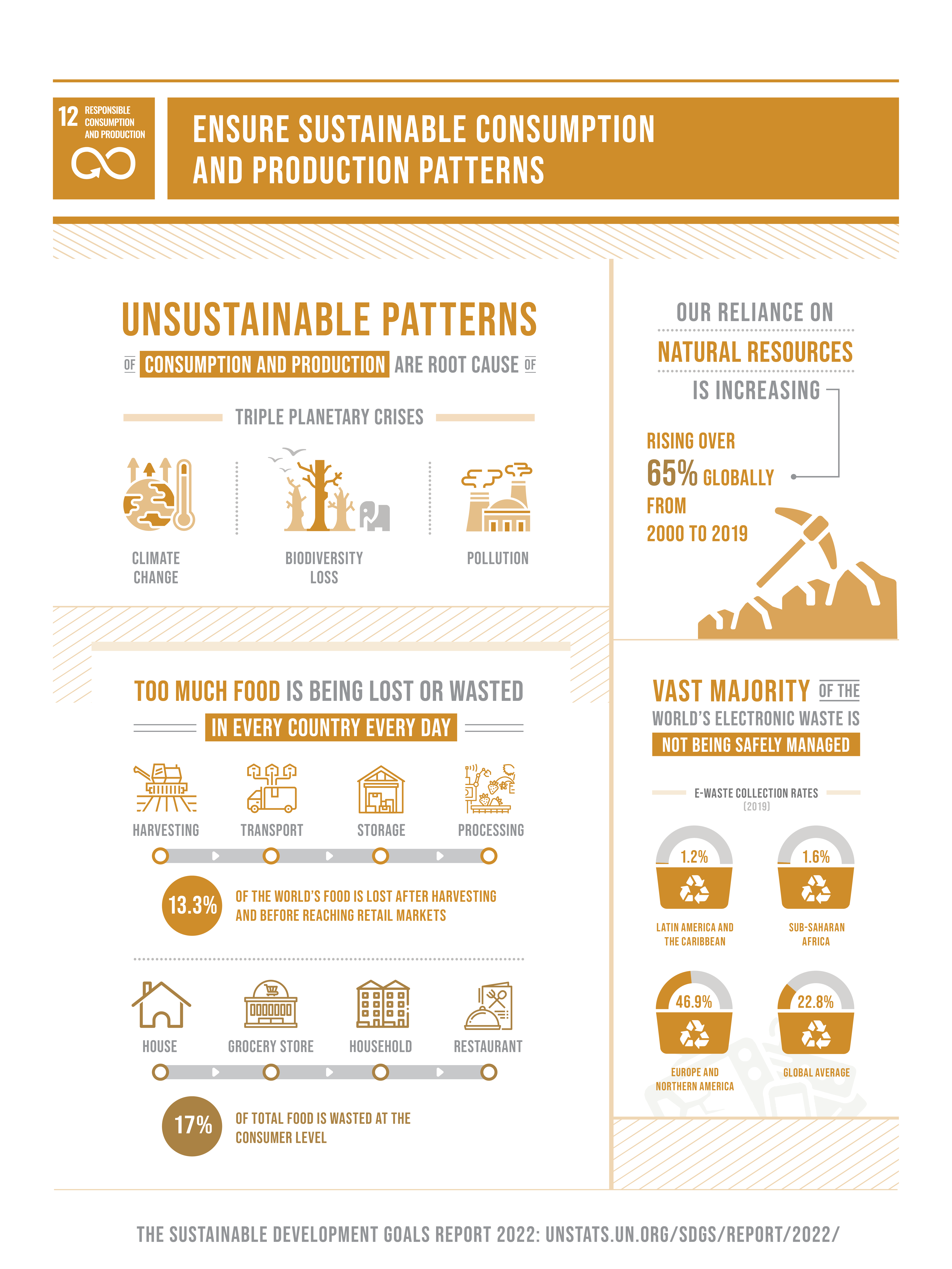 Implement the 10-Year Framework of Programmes on Sustainable Consumption and Production Patterns, all countries taking action, with developed countries taking the lead, taking into account the development and capabilities of developing countries

Number of countries developing, adopting or implementing policy instruments aimed at supporting the shift to sustainable consumption and production

(a) Food loss index and (b) food waste index

Developing countries bear a large part of the climate, biodiversity and pollution impacts of resource-intensive production processes, without reaping their benefits. This situation has been made worse by the impacts of the pandemic. As part of sustainable global pandemic recovery strategies, the implementation of sustainable consumption and production will maximize the socioeconomic benefits of resource use while minimizing the impacts.

The proportion of food lost globally after harvest on farm, transport, storage, wholesale and processing levels is estimated at 13.3 per cent in 2020, with no visible trend since 2016, suggesting that structural patterns of food losses have not changed. At the regional level, sub-Saharan Africa has the highest proportion of losses at 21.4 per cent, with food being lost in large quantities between the farm and retail levels.

In addition to food loss, it is estimated that 931 million tons of food, or 17 per cent of total food available to consumers in 2019, was wasted at the household, food service and retail levels. Subsequent evidence suggests that household food waste declined during the COVID-19 pandemic lockdowns but has since returned to pre-pandemic levels.

The COVID-19 pandemic aggravated the global pollution crisis, in particular plastics pollution, making the effective implementation of the Basel Convention on the Control of Transboundary Movements of Hazardous Wastes and Their Disposal, the Rotterdam Convention on the Prior Informed Consent Procedure for Certain Hazardous Chemicals and Pesticides in International Trade and the Stockholm Convention on Persistent Organic Pollutants so much more urgent and important. The year 2021 was marked by the establishment of a new global regime for controlling trade of plastic wastes for better transparency and tracing, following the adoption of the plastic waste amendments to the Basel Convention in 2019.

A preliminary analysis from a sample of over 10,000 public companies around the world shows that over 60 per cent of large companies published sustainability reports in 2021, a twofold increase from 2016. The sustainability indicators that are most widely disclosed by companies include direct CO2 emissions, board diversity E/2022/55 22-06472 19/25 and number of board meetings, while the least disclosed indicators include ozone depleting substances, gender pay gap and bribery and fraud controversies.

In 2020, Governments spent $375 billion on subsidies and other support for fossil fuels. While consumer subsidies decreased compared with 2019, this has been due largely to low oil prices and decreased demand during the pandemic rather than to structural reforms.

For decades, scientists have been explaining the ways in which humanity is driving the three planetary crises of climate, biodiversity and pollution, all of which are linked to unsustainable production and consumption. Changes in consumption and production patterns can help to promote the decoupling of economic growth and human well-being from resource use and environmental impact. They can also trigger the transformations envisaged in global commitments on biodiversity, the climate, and sustainable development in general. The COVID-19 pandemic provides a window of opportunity for exploring more inclusive and equitable development models that are underpinned by sustainable consumption and production.

From 2017 to 2020, 83 countries, territories and the European Union shared information on their contribution to the implementation of the 10-Year Framework of Programmes on Sustainable Consumption and Production Patterns. In 2020, 136 policies and 27 implementation activities were reported, bringing the total number to over 700. While specific actions have been taken to improve resource use efficiency in a specific industry or area, this has not resulted in their widespread adoption across sectors and industries.

Although limited data are available, as of 2016, almost 14 per cent of food produced globally was lost before reaching the retail sector. Estimates vary across regions, from 20.7 per cent in Central and Southern Asia to 5.8 per cent in Australia and New Zealand.

Fossil fuel subsidies declined in 2019 to $431.6 billion as a result of lower fuel prices, reversing the upward trend from 2017 to 2018. Fossil fuel subsidies are expected to fall sharply owing to the collapse in demand caused by COVID-19 mitigation efforts and the oil price shock experienced in 2020.