Ensure availability and sustainable management of water and sanitation for all 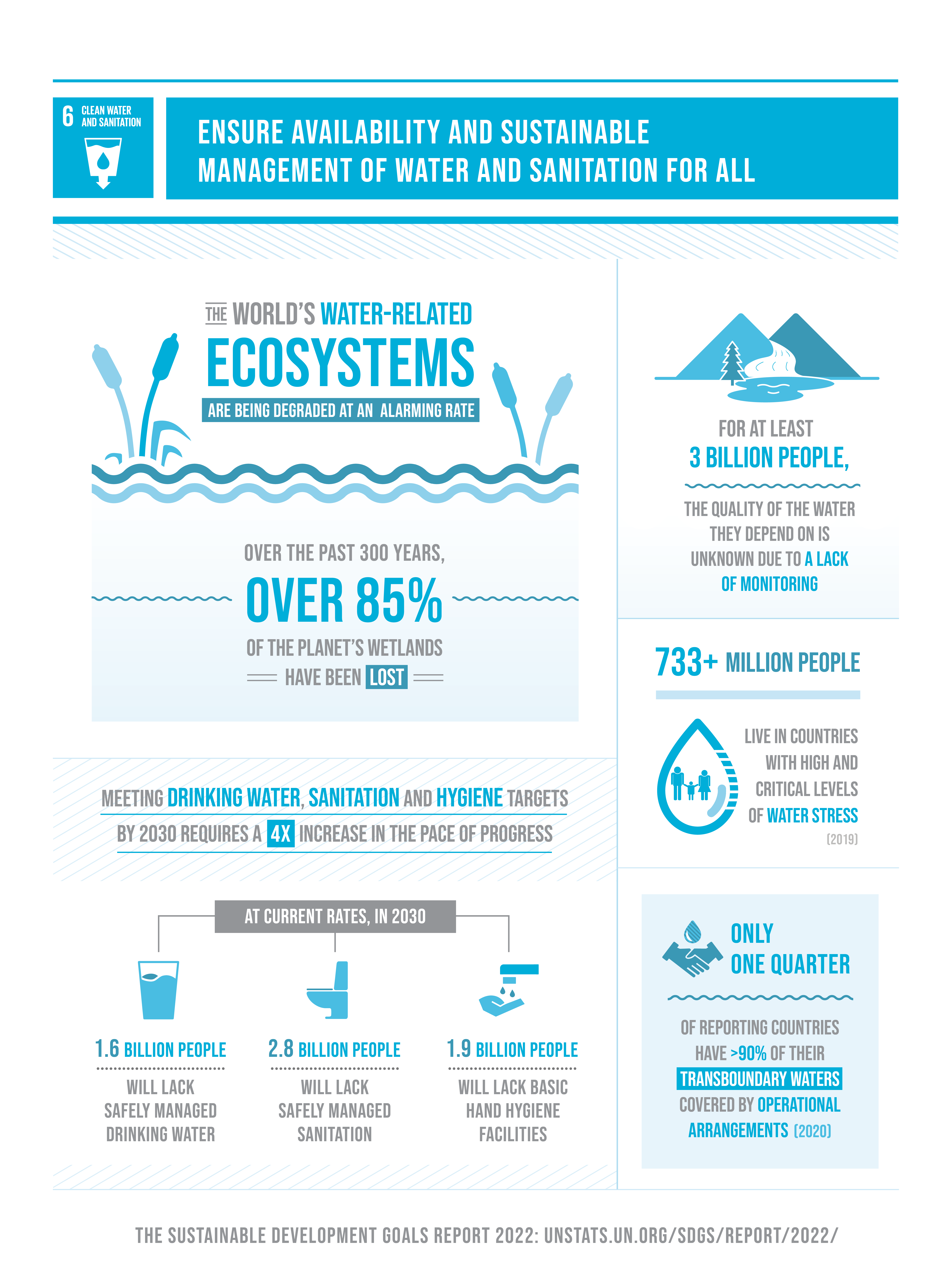 By 2030, achieve universal and equitable access to safe and affordable drinking water for all

By 2030, achieve access to adequate and equitable sanitation and hygiene for all and end open defecation, paying special attention to the needs of women and girls and those in vulnerable situations

Proportion of bodies of water with good ambient water quality

Change in water-use efficiency over time

Level of water stress: freshwater withdrawal as a proportion of available freshwater resources

By 2030, implement integrated water resources management at all levels, including through transboundary cooperation as appropriate

Change in the extent of water-related ecosystems over time

Access to safe water, sanitation and hygiene is the most basic human need for health and well-being. Billions of people will lack access to these basic services in 2030 unless progress quadruples. Demand for water is rising owing to rapid population growth, urbanization and increasing water needs from agriculture, industry, and energy sectors. Decades of misuse, poor management, overextraction of groundwater and contamination of freshwater supplies have exacerbated water stress. In addition, countries are facing growing challenges linked to degraded water-related ecosystems, water scarcity caused by climate change, underinvestment in water and sanitation and insufficient cooperation on transboundary waters.

Assessment of rivers, lakes and aquifers in 97 countries in 2020 shows that 60 per cent of water bodies assessed have good water quality. Of the 76,000 water bodies that were reported on in 2020, only 1 per cent were from the poorest countries. For at least 3 billion people, the quality of the water they rely upon is unknown owing to a lack of monitoring.

To ensure a sustainable and equitable distribution of water to meet domestic, industrial, agricultural and environmental needs, the average global rate of implementation of improved management of water resources – from 49 in 2017 to 54 in 2020 – needs urgently to double. With political will and adequate financing, 22 countries made significant gains between 2017 and 2020, showing that real and rapid progress is possible and providing tangible examples for the 107 countries that need to significantly accelerate implementation.

Transboundary rivers, lakes and aquifers are shared by 153 countries around the world. Ensuring that these waters are managed equitably, sustainably, and peacefully, particularly in the context of climate change, requires countries to put in place operational arrangements for water cooperation. Data from 2017 and 2020 suggest slow progress, with only 32 countries having 90 per cent or more of their transboundary waters covered by such arrangements.

Over the past 300 years, wetland ecosystems have experienced an 85 per cent loss in extent despite the very high value goods and services that they provide. Additionally, the extent of surface water bodies, including lakes, rivers, and reservoirs, is rapidly changing across the entire planet, with one in five river basins experiencing high - above natural - fluctuations in surface water during the last five years. Population growth, changes to land cover and land use and climate change are key drivers of these changes to freshwater ecosystems.

Source: Progress Towards the Sustainable Development Goals- Report of the Secretary-General

Billions of people worldwide still live without safely managed drinking-water, sanitation and hygiene services, which are critical for protecting human health and containing the spread of the COVID-19 virus. Over the past century, global water use has increased at more than twice the rate of population growth. In addition to water stress, countries and territories are facing growing challenges linked to water pollution, degraded water-related ecosystems, water scarcity caused by climate change, and a lack of cooperation on transboundary waters. The world is not on track to achieve Goal 6. A dramatic acceleration is needed in the current rates of progress and in integrated and holistic approaches to water management.

An assessment of rivers, lakes and aquifers of 89 countries and territories in 2020 indicates that the water quality of 72 per cent of the water bodies assessed is good. Protection is easier than restoration, so efforts to protect these water bodies from pollution must be initiated now.

In 2018, global water stress was estimated to be 18.4 per cent, an increase from 18.2 per cent in 2015. Regions such as Western and Southern Asia and Northern Africa present very high levels of water stress at more than 70 per cent, while SouthEastern Asia, Latin America and the Caribbean, and sub-Saharan Africa saw their water stress levels increase from 2017 to 2018.

In 2020, 129 countries and territories were not on track to meet the target for implementing integrated water resources management by 2030, which includes financing and intersectoral coordination mechanisms, basin management and monitoring. The rate of implementation needs to double globally. In many countries and territories, the COVID-19 pandemic has led to wider stakeholder engagement in water resources management through online consultations.

Advancing transboundary water cooperation plays a crucial role in preventing conflicts and supporting wider regional integration, peace and sustainable development. However, according to data from 2017 and 2020, only 24 of the 153 countries and territories that share transboundary rivers, lakes and aquifers have 100 per cent of their transboundary basin area covered by operational arrangements, and only another 22 countries and territories have more than 70 per cent covered.

Freshwater ecosystems and the multitude of resources that they provide are changing dramatically. One fifth of the world’s river basins are experiencing rapid increases or decreases in surface water area. This unprecedented situation is compounded by pollution in large lakes and the persistent loss and degradation of wetlands and freshwater biodiversity. Between 1970 and 2015, the total area of inland and marine or coastal wetlands declined by approximately 35 per cent, three times the rate of forest loss. Existing efforts to protect and restore water-related ecosystems must be scaled up and accelerated urgently.

In 2018 and 2019, two thirds of the 109 reporting countries and territories had procedures for the participation of local communities in water and sanitation management that were defined in laws or policies. However, only 14 countries and territories reported high levels of community and user participation in collaborative management and decision-making.

Billions of people throughout the world still lack access to safely managed water and sanitation services and basic handwashing facilities at home, which are critical to preventing spreading the spread of COVID-19. Immediate action to improve Water, Sanitation and Hygiene for All (WASH) is critical to preventing infection and containing its spread.

In 2016, one in four health-care facilities throughout the world lacked basic water services, and one in five had no sanitation services.

Preliminary estimates from 79 mostly high- and higher-middle income countries in 2019 suggest that, in about one quarter of the countries, less than half of all household wastewater flows were treated safely.

In 2018, 60 per cent of 172 countries reported very low, low and medium-low levels of implementation of integrated water resources management and were unlikely to meet the implementation target by 2030.

ODA disbursements to the water sector increased to $9 billion, or 6 per cent, in 2018, following a decrease in such disbursements in 2017. However, ODA commitments fell by 9 per cent in 2018. Because countries have signalled a funding gap of 61 per cent between what is needed to achieve national drinking water and sanitation targets and available funding, increasing donor commitments to the water sector will remain crucial to make progress towards Goal 6.

Despite progress, billions of people still lack safe water, sanitation and handwashing facilities. Data suggests that achieving universal access to even basic sanitation service by 2030 would require doubling the current annual rate of progress. More efficient use and management of water are critical to addressing the growing demand for water, threats to water security and the increasing frequency and severity of droughts and floods resulting from climate change. As of the time of writing, most countries are unlikely to reach full implementation of integrated water resources management by 2030.

Access to safe water and sanitation and sound management of freshwater ecosystems are essential to human health and to environmental sustainability and economic prosperity.

High-level Preparatory meeting of the United Nations Conference on the Midterm Comprehensive Review of the Implementation of the Objectives of the International Decade for Action “Water for Sustainable Development”, 2018–2028

World Water Day Event “Towards the UN 2023 Water Conference: The One Year Mark”