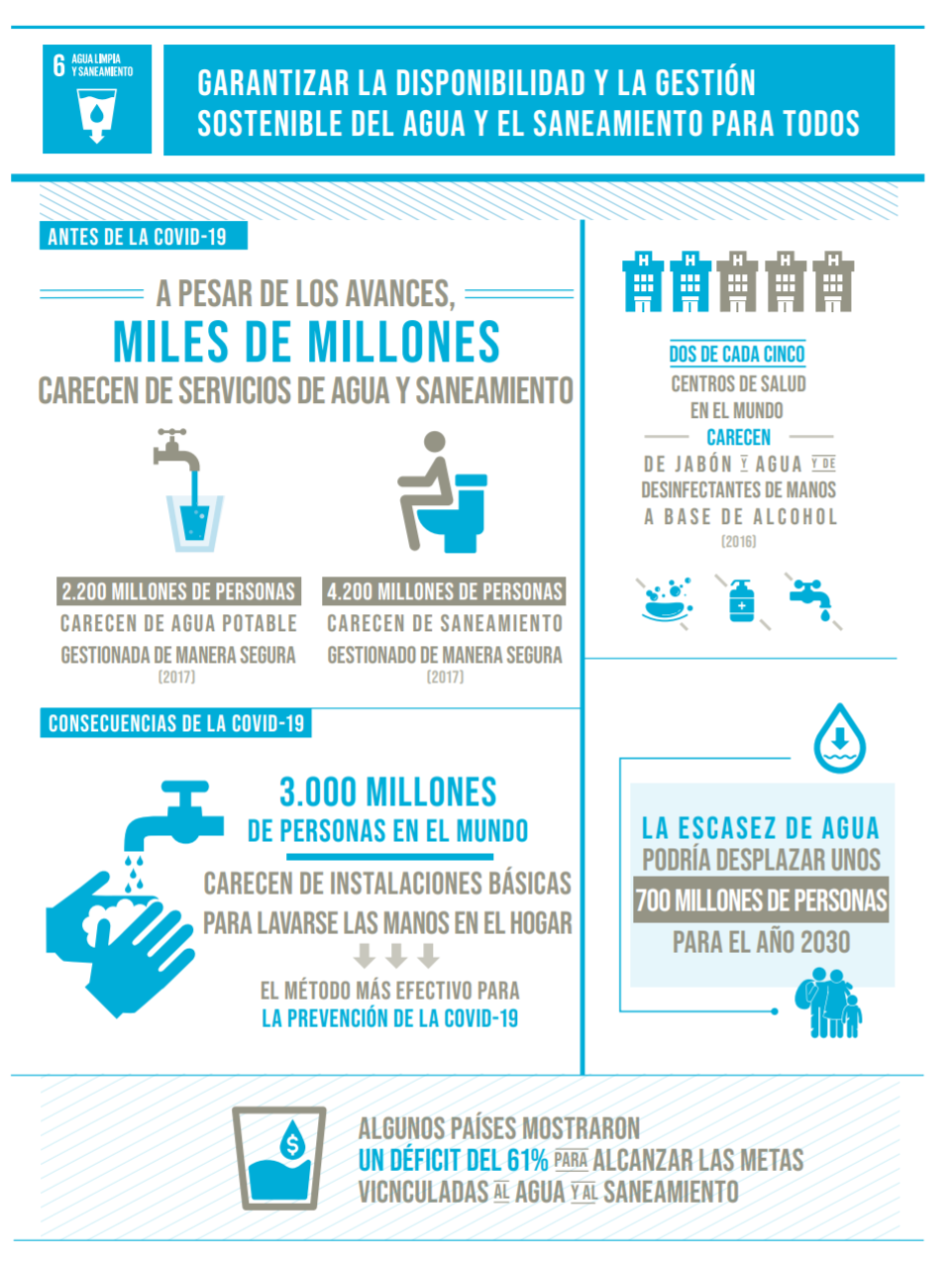 By 2030, achieve universal and equitable access to safe and affordable drinking water for all

By 2030, achieve access to adequate and equitable sanitation and hygiene for all and end open defecation, paying special attention to the needs of women and girls and those in vulnerable situations

Proportion of population using safely managed sanitation services, including a hand-washing facility with soap and water

Proportion of bodies of water with good ambient water quality

Change in water-use efficiency over time

Level of water stress: freshwater withdrawal as a proportion of available freshwater resources

By 2030, implement integrated water resources management at all levels, including through transboundary cooperation as appropriate

Change in the extent of water-related ecosystems over time

Billions of people worldwide still live without safely managed drinking water, sanitation and hygiene services, which are critical for protecting human health and containing the spread of COVID-19. Over the last century, global water use has increased at more than twice the rate of population growth. In addition to water stress, countries are facing growing challenges linked to water pollution, degraded water-related ecosystems, water scarcity caused by climate change and cooperation over transboundary waters. The world is not on track to achieve SDG 6. A dramatic acceleration in current rates of progress and integrated and holistic approaches to water management is needed.

Assessment of rivers, lakes and aquifers of 89 countries in 2020 shows that 60% of water bodies assessed have good water quality. Protection is easier than restoration, so efforts to protect these water bodies from pollution must be initiated now.

In 2018, world water stress was estimated to be equivalent to 18.4%, increasing from 18.2% in 2015. Indeed, regions such as Western Asia, Northern Africa and Southern Asia present very high levels of water stress of more than 70%, whilst South-eastern Asia, Latin America and the Caribbean and sub-Saharan Africa saw an increase in their water stress levels from 2017 to 2018.

In 2020, 129 countries were not on track to hit the target of implementation of integrated water resources management by 2030, which includes financing and inter-sectoral coordination mechanisms, basin management, and monitoring. Globally, the rate of implementation needs to double. In many countries, COVID-19 has actually led to wider stakeholder engagement in water resources management through online consultations.

Advancing transboundary water cooperation plays a crucial role in preventing conflicts, supporting wider regional integration, peace and sustainable development. However, out of 153 countries sharing transboundary rivers, lakes and aquifers, only 24 have 100% of their transboundary basin area covered by operational arrangements, and only an additional 22 countries have more than 70% covered (based on data from 2017 and 2020).

Freshwater ecosystems and the multitude of goods and services they provide are changing dramatically. One fifth of the world’s river basins are experiencing a significant change in surface water. This unprecedented situation is compounded by pollution in large lakes and the persistent loss and degradation of wetlands and freshwater biodiversity. Between 1970 and 2015, inland and marine/coastal wetlands both declined by approximately 35%, three times the rate of forest loss. Existing efforts to protect and restore water-related ecosystems must be urgently scaled up and accelerated

Billions of people throughout the world still lack access to safely managed water and sanitation services and basic handwashing facilities at home, which are critical to preventing spreading the spread of COVID-19. Immediate action to improve Water, Sanitation and Hygiene for All (WASH) is critical to preventing infection and containing its spread.

In 2016, one in four health-care facilities throughout the world lacked basic water services, and one in five had no sanitation services.

Preliminary estimates from 79 mostly high- and higher-middle income countries in 2019 suggest that, in about one quarter of the countries, less than half of all household wastewater flows were treated safely.

In 2018, 60 per cent of 172 countries reported very low, low and medium-low levels of implementation of integrated water resources management and were unlikely to meet the implementation target by 2030.

ODA disbursements to the water sector increased to $9 billion, or 6 per cent, in 2018, following a decrease in such disbursements in 2017. However, ODA commitments fell by 9 per cent in 2018. Because countries have signalled a funding gap of 61 per cent between what is needed to achieve national drinking water and sanitation targets and available funding, increasing donor commitments to the water sector will remain crucial to make progress towards Goal 6.

Despite progress, billions of people still lack safe water, sanitation and handwashing facilities. Data suggests that achieving universal access to even basic sanitation service by 2030 would require doubling the current annual rate of progress. More efficient use and management of water are critical to addressing the growing demand for water, threats to water security and the increasing frequency and severity of droughts and floods resulting from climate change. As of the time of writing, most countries are unlikely to reach full implementation of integrated water resources management by 2030.

Access to safe water and sanitation and sound management of freshwater ecosystems are essential to human health and to environmental sustainability and economic prosperity.