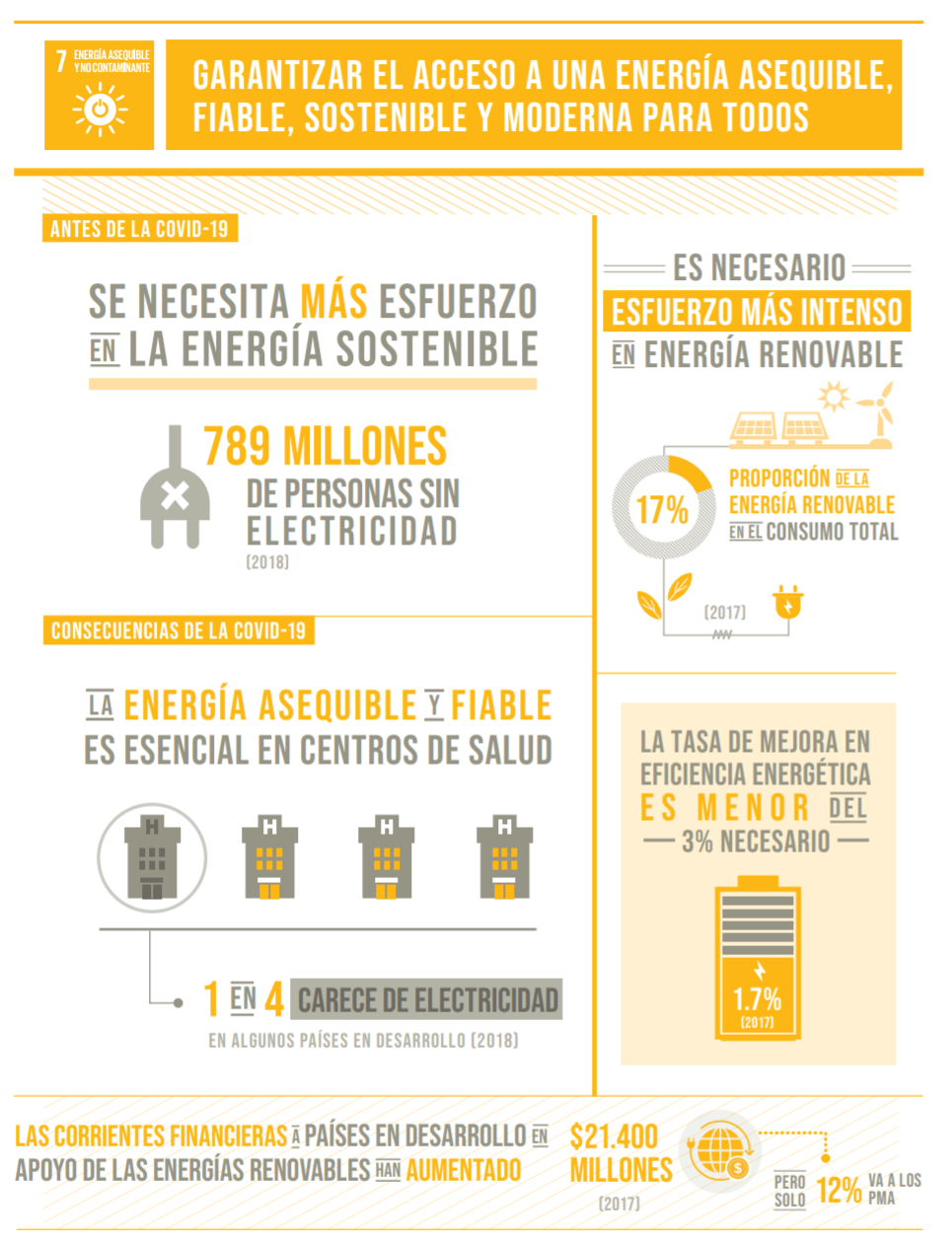 Despite significant progress over the past decade on improving access to electricity, increasing renewable energy use in the electricity sector and improving energy efficiency, the world is still falling short in providing affordable, reliable, sustainable and modern energy for all. Clean and sustainable energy should be at the heart of the COVID-19 response and of efforts to combat climate change.

Global access to electricity increased from 83 per cent in 2010 to 90 per cent in 2019, with an increase in average annual electrification of 0.876 percentage points. The global access deficit decreased from 1.22 billion in 2010 to 759 million in 2019. Despite the significant effort made, there may still be as many as 660 million people without access worldwide in 2030. In addition, the COVID-19 pandemic will impede progress on future electrification.

In 2019, 66 per cent of the global population had access to clean cooking fuels and technologies. For the period 2010–2019, most of the increases in such access occurred in the most populous low- and middle-income countries and territories: Brazil, China, India, Indonesia and Pakistan. People reliant on polluting fuels and technologies are exposed to high levels of household air pollution with serious consequences for their cardiovascular and respiratory systems, increasing their vulnerability to diseases including the COVID-19 virus.

Global primary energy intensity increased from 5.6 megajoules per dollar of gross domestic product (GDP) in 2010 to 4.8 megajoules in 2018, an average annual rate of improvement of 2 per cent. While early estimates for 2019 also indicate an improvement of 2 per cent, the outlook for 2020 suggests a rate of only 0.8 per cent because of the pandemic. Annual improvement until 2030 will need to average 3 per cent if the Goal 7.3 target is to be met.

Developing countries had a renewable energy capacity of 219 watts per capita at the end of 2019, an increase of 7 per cent over the year but slightly less than the 8.8 per cent expansion in per capita capacity for 2018. Per capita hydropower capacity remained stable in 2019, as total capacity increased in line with population growth during the year at approximately 0.4 per cent. Solar and wind capacities both expanded much faster than population growth, leading to increases in per capita capacity of 22.2 and 11.3 per cent, respectively.