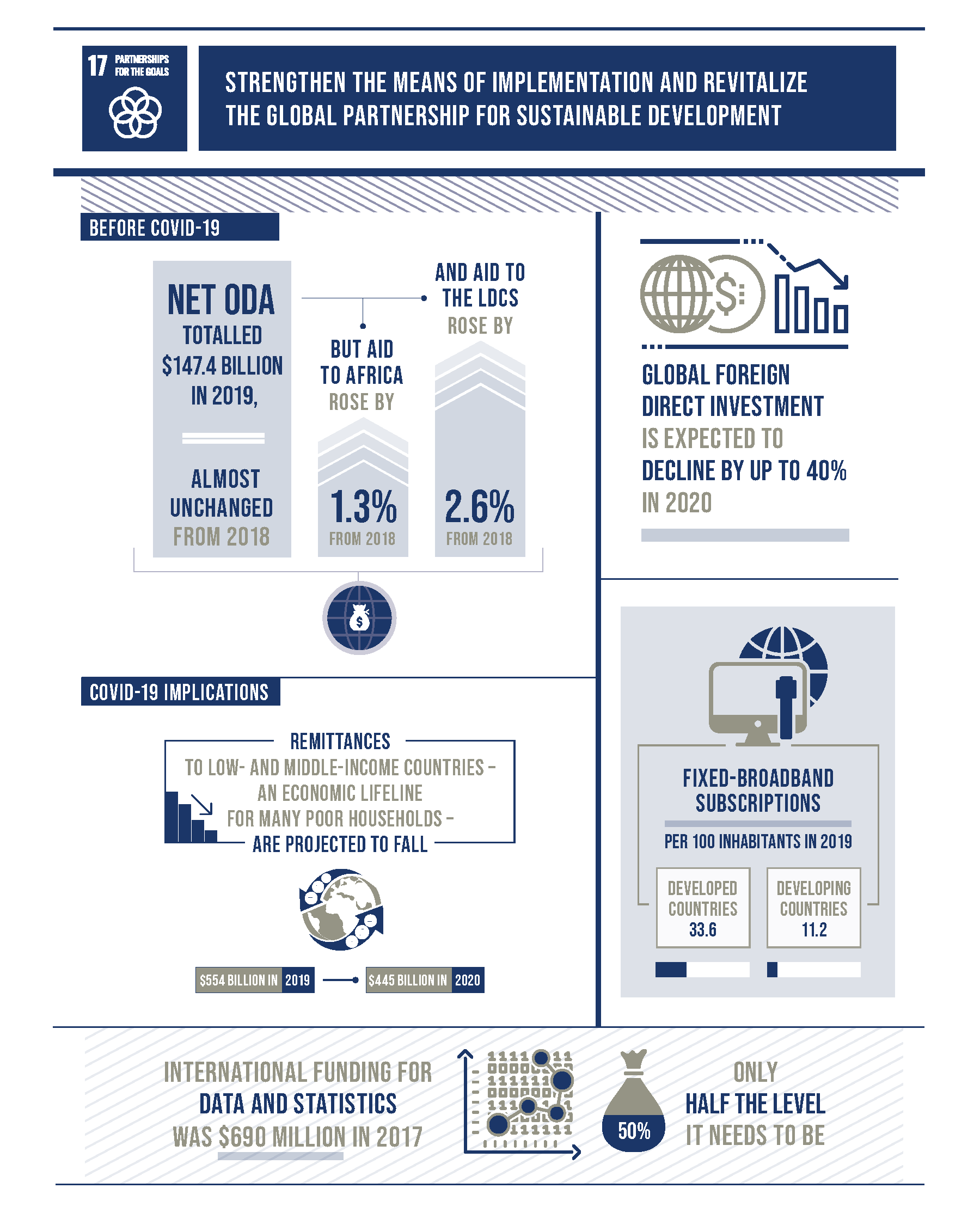 Strengthen domestic resource mobilization, including through international support to developing countries, to improve domestic capacity for tax and other revenue collection

Enhance North-South, South-South and triangular regional and international cooperation on and access to science, technology and innovation and enhance knowledge sharing on mutually agreed terms, including through improved coordination among existing mechanisms, in particular at the United Nations level, and through a global technology facilitation mechanism

Promote the development, transfer, dissemination and diffusion of environmentally sound technologies to developing countries on favourable terms, including on concessional and preferential terms, as mutually agreed

Promote a universal, rules-based, open, non-discriminatory and equitable multilateral trading system under the World Trade Organization, including through the conclusion of negotiations under its Doha Development Agenda

Significantly increase the exports of developing countries, in particular with a view to doubling the least developed countries’ share of global exports by 2020

Encourage and promote effective public, public-private and civil society partnerships, building on the experience and resourcing strategies of partnerships Data, monitoring and accountability

Given that the multilateral and global partnerships were already challenged due to scarce financial resources, trade tensions, technological obstacles and lack of data, the pandemic has added an unprecedented shock to the global system. On top of this, foreign direct investment is under severe pressure and expected to drop by 40%. The numerous fiscal impacts of the pandemic are leading to debt distress in countries and limiting their fiscal and policy space for critical investments in recovery (including accessing vaccines), climate change and the SDGs, threatening to prolong recovery periods. The COVID-19 pandemic has put the spotlight on the crucial role of global partnerships. The inter-connected global economy requires a global response to ensure all countries, in particular developing countries, can address the compounding and parallel health, economic and environmental crises to recover better.

As of 2019, on average across approximately 130 economies, government revenue (taxes, social contributions, grants and other) accounts for approximately 33% of GDP. In addition, the average overall tax burden or revenue in the form of taxes, is 25% of GDP amongst advanced economies and 17% of GDP amongst emerging market and developing economies. The average proportion of government expenditure funded by taxes, amongst advanced economies is 67% amongst emerging market and 62% amongst developing economies.

Net ODA flows were $161 billion in 2020, an increase of 7% in real terms compared to 2019, reaching its highest level ever recorded. This is equivalent to 0.32% of DAC donors’ combined gross national income, up from 0.30% in 2019 but below a target of 0.7% ODA to GNI. The increase in ODA is in part due to DAC members’ support of an inclusive global recovery in light of the pandemic and in part due to an increase in bilateral sovereign lending by some loan-giving members.

Global flows of foreign direct investment (FDI) were under severe pressure in 2020. These vital resources are expected to have fallen by 40% from 2019 levels of $1.5 trillion to below $1 trillion for the first time since 2005, undoing the already lackluster growth in international investment over the past decade. International private sector investment flows to developing and transition economies in sectors relevant for the SDGs were also on course to fall by about one-third in 2020.

As the COVID-19 pandemic and economic crisis has continued, remittance flows to low and middle-income countries are estimated to have fallen by 7%, to $508 billion in 2020, to be followed by a further decline of 7.5%, to $470 billion in 2021.

As of 2019, just over half of the world’s population is online, with a large digital divide observed among regions. For instance, while 85% of the population was using the Internet in Europe and Northern America, only 20% were connected in LDCs.

Total ODA for capacity building and national planning stood at $35.9 billion in 2019 and represented 14% of total sector allocable aid, stable since 2010. The main sectors assisted were energy policy, public administration and the financial sector, which received a total of $13.8 billion.

For the period 2017 to 2019, the worldwide weighted tariff average has remained stable at around 2%. Agriculture and clothing still have the highest tariff averages at around 6%, followed by textiles at around 4%. In 2019, small but relatively more significant improvements were recorded for two important sectors (textile and clothing) for LDCs and developing countries.

The share of LDC exports in global merchandise trade remained constant at 1% in 2019, and over the last decade has stagnated after significant improvements from 2000 to 2010. The target of doubling the share of global LDC exports by 2020 from 2011 (a 2% target) is unlikely to be achieved. For developing countries, the share in world merchandise exports has remained constant at around 45% since 2012. In 2019, LDCs share in world services exports stood at 0.8%. Developing countries’ share in world services exports has flattened since 2012, reaching 30.2% in 2019.

Out of 114 countries providing and/or receiving development cooperation, less than half (56 countries) reported making overall progress towards strengthening multi–stakeholder partnerships for development for the achievement of the SDGs in 2018.

ODA for data and statistics has increased from $591 million in 2015 to $693 million in 2018. Almost every region received more support in 2017-2018 than in 2015-2016. Despite the progress made in the first four years, the trend of support to data and statistics may be reaching a bottleneck, as nowcasting analysis indicated no significant increase in 2019. While the need for sound data continues to escalate, including now to address and mitigate the impacts of the pandemic, many countries still lack the resources to produce them.

6th Multi-stakeholder Forum on Science, Technology and Innovation for the Sustainable Development Goals

Partnerships in response to COVID-19 - Building back better together