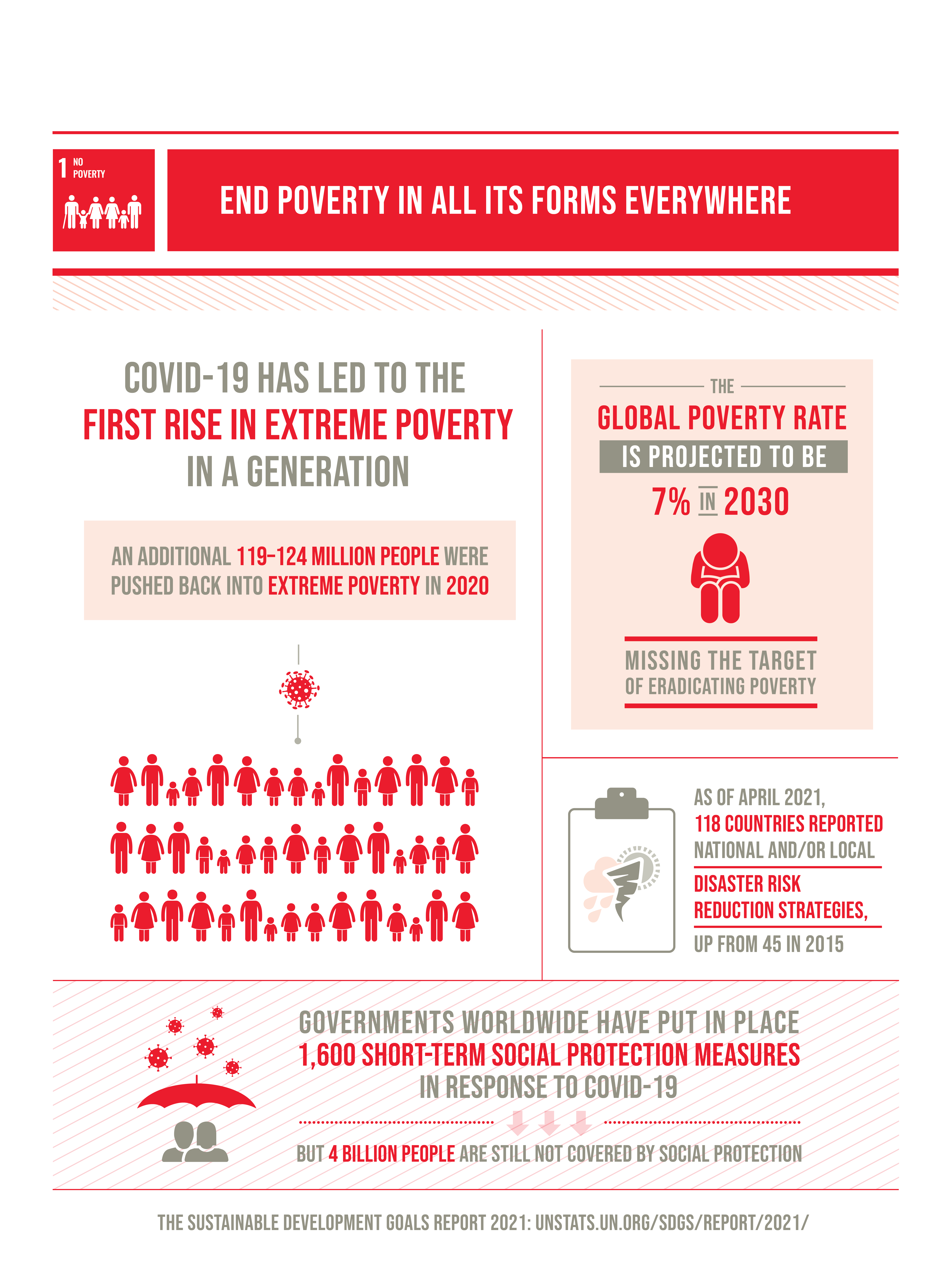 By 2030, eradicate extreme poverty for all people everywhere, currently measured as people living on less than $1.25 a day

By 2030, ensure that all men and women, in particular the poor and the vulnerable, have equal rights to economic resources, as well as access to basic services, ownership and control over land and other forms of property, inheritance, natural resources, appropriate new technology and financial services, including microfinance

The slowdown in progress on poverty reduction since 2015 has been further set back by the COVID-19 pandemic, with the global rate of extreme poverty rising in 2020 for the first time in over 20 years. The triple threat of COVID-19, conflict and climate change makes the global goal of ending poverty by 2030 unachievable unless immediate and substantial policy actions are taken. The COVID-19 crisis has demonstrated the importance of social protection systems for protecting health, employment and income, with many new social protection measures introduced in 2020 as a result. However, 4 billion people worldwide are still without any social protection, most of whom are poor and vulnerable.

Compounding the threats to poverty eradication posed by climate change and conflict, the pandemic is set to increase the number of poor people in 2020 by between 119 and 124 million, causing the extreme poverty rate to rise for the first time in a generation, from 8.4 per cent in 2019 to 9.5 per cent in 2020 according to “nowcasts”. Of the “new poor”, 8 out of 10 are in middle-income countries and territories. It is predicted that around 600 million people will still be living in extreme poverty by 2030.

The share of workers around the world living in extreme poverty fell from 14 per cent in 2010 to 7.8 per cent in 2015 and 6.6 per cent in 2019, although progress for young workers was less encouraging. However, the pandemic has severely affected the informal economy, in which the vast majority of the working poor are employed. The crisis also has had a disproportionate impact on the livelihoods of young and female workers, who are already much more likely to be living in poverty. In 2019, young people were twice as likely as adults to be among the working poor.

By 2020, only 47 per cent of the global population was covered effectively by at least one social protection cash benefit, leaving 4 billion people unprotected. However, between 1 February and 31 December 2020, governments of 209 countries and territories announced more than 1,600 mostly short-term social protection measures in response to the COVID-19 crisis.

Total ODA grants for basic social services and development food aid, which are intended for poverty reduction, represented 0.02 per cent of the gross national income of donors to the Development Assistance Committee in 2019.

LAUNCH OF E-LEARNING COURSE ON HARNESSING CLIMATE and SDGs SYNERGIES