Promote peaceful and inclusive societies for sustainable development, provide access to justice for all and build effective, accountable and inclusive institutions at all levels 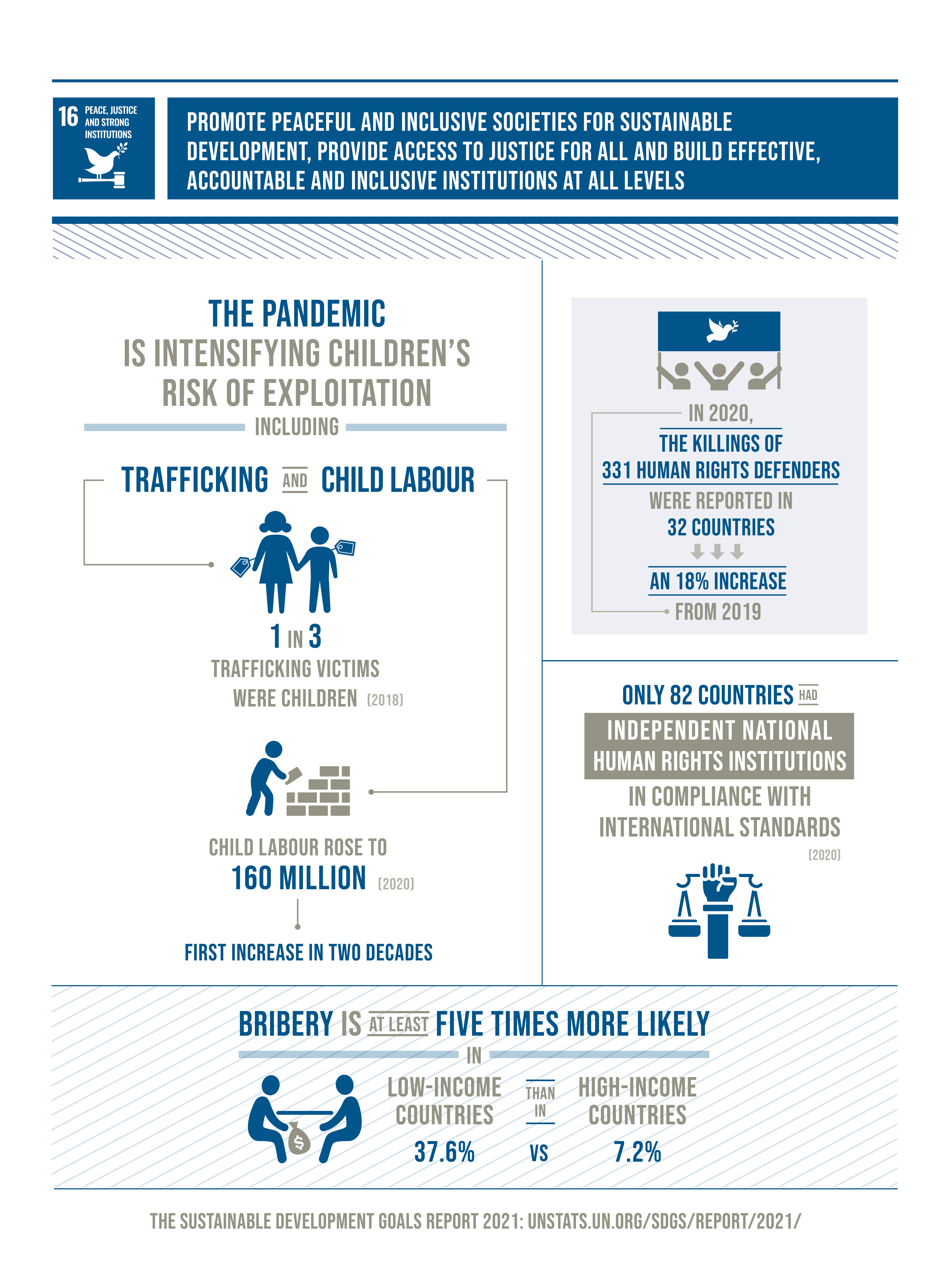 Proportion of population subjected to (a) physical violence, (b) psychological violence and (c) sexual violence in the previous 12 months

End abuse, exploitation, trafficking and all forms of violence against and torture of children

Proportion of the population who have experienced a dispute in the past two years and who accessed a formal or informal dispute resolution mechanism, by type of mechanism

By 2030, significantly reduce illicit financial and arms flows, strengthen the recovery and return of stolen assets and combat all forms of organized crime

Substantially reduce corruption and bribery in all their forms

Develop effective, accountable and transparent institutions at all levels

Proportion of population satisfied with their last experience of public services

Ensure responsive, inclusive, participatory and representative decision-making at all levels

Proportions of positions in national and local institutions, including (a) the legislatures; (b) the public service; and (c) the judiciary, compared to national distributions, by sex, age, persons with disabilities and population groups

By 2030, provide legal identity for all, including birth registration

Strengthen relevant national institutions, including through international cooperation, for building capacity at all levels, in particular in developing countries, to prevent violence and combat terrorism and crime

The world is still a long way from achieving the goal of building peaceful, just and inclusive societies, with millions of people living in fragile and conflict-affected States. At the end of 2019, 79.5 million people had been forcibly displaced worldwide, equivalent to 1 per cent of the global population. The COVID-19 pandemic has exposed inequalities and discrimination and has tested, weakened, and in some cases shattered rights and protection systems in countries and territories.

Even before the pandemic, violence against children was widespread, affecting victims regardless of wealth or social status. In 77 mostly low- and middle-income countries and territories with available data from 2012 to 2020, 8 in 10 children, ranging from 1 to 14 years of age, had been subjected to some form of psychological aggression or physical punishment at home in the previous month.

In 2018, some 5 in 10 victims of human trafficking detected globally were women and 2 in 10 were girls. Moreover, about one third of all detected victims wer e children. About 50 per cent of the detected victims were trafficked for sexual exploitation and 38 per cent for forced labour. The sharp rise in unemployment brought about by the pandemic is likely to increase trafficking in persons.

Globally, the proportion of prisoners held in detention in 2019 without being sentenced for a crime remained high at 31 per cent of the total prison population, with no significant change since 2000.

Establishment-level data from 145 countries and territories surveyed between 2006 and 2020 indicate that almost one business in six around the world is subject to requests from public officials for bribe payments.

According to data for the period from 2010 to 2020, the births of around one in four children under 5 years of age worldwide were not officially recorded. Only 45 per cent of all children under 5 in sub-Saharan Africa had their births registered

In 2020, the number of independently functioning national human rights institutions in sub-Saharan Africa and Europe increased by three, raising the proportion of countries and territories that had successfully achieved compliance with the Principles and Guidelines on Children Associated with Armed Forces or Armed Groups to 42 per cent. However, progress has stalled in Latin America and the Caribbean, Oceania, Western Asia, and Eastern and South-Eastern Asia, where no new independent national human rights institutions have been recognized or established since 2018.

Workshop on Accelerating the Implementation of the 2030 Agenda and AU Agenda 2063 in Africa: Building Resilient Institutions for the SDGs in the time of COVID-19

Good practices for national planning and the 2030 Agenda