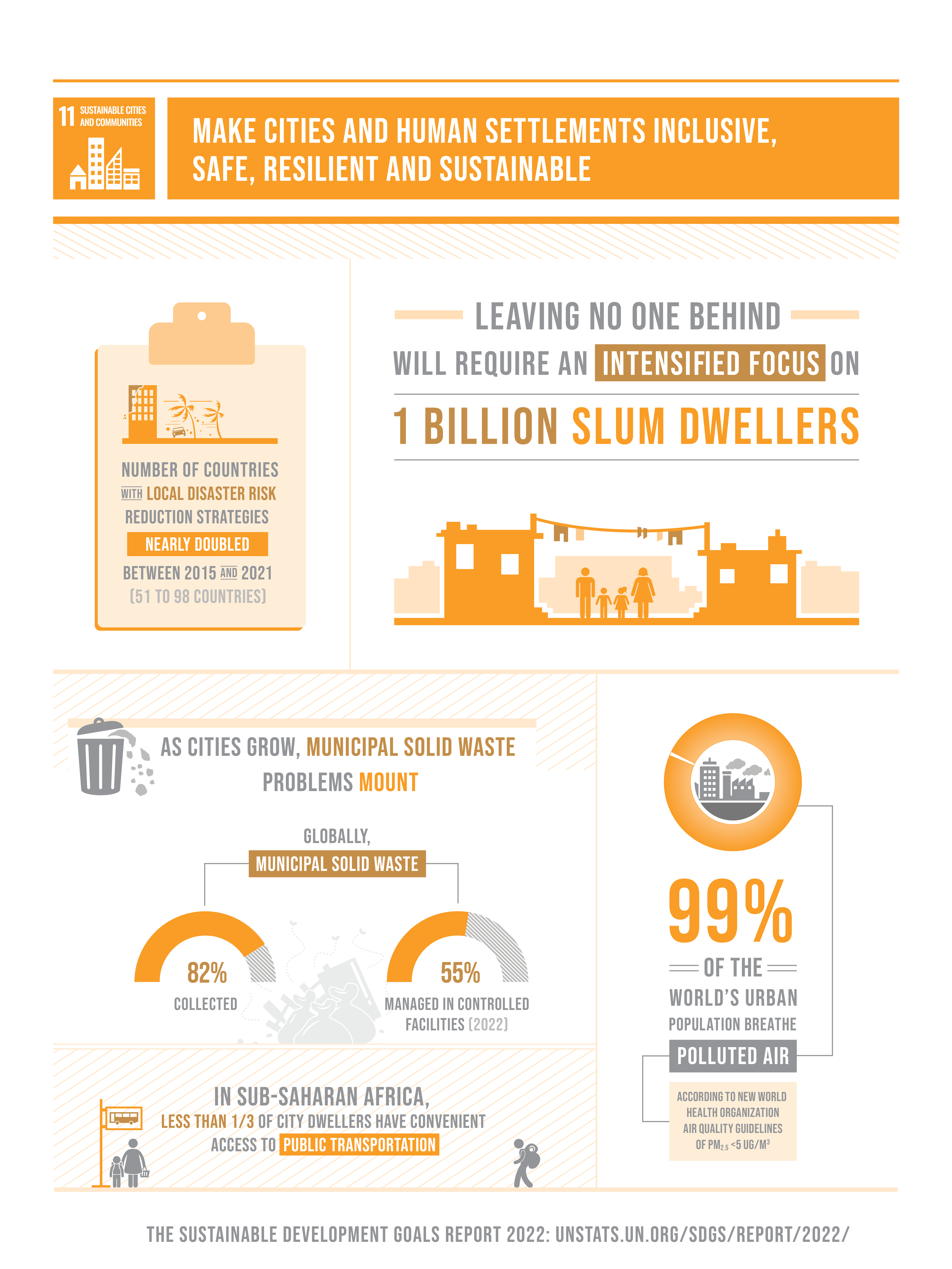 By 2030, provide access to safe, affordable, accessible and sustainable transport systems for all, improving road safety, notably by expanding public transport, with special attention to the needs of those in vulnerable situations, women, children, persons with disabilities and older persons

By 2030, enhance inclusive and sustainable urbanization and capacity for participatory, integrated and sustainable human settlement planning and management in all countries

Total per capita expenditure on the preservation, protection and conservation of all cultural and natural heritage, by source of funding (public, private), type of heritage (cultural, natural) and level of government (national, regional, and local/municipal)

(a) Damage to critical infrastructure and (b) number of disruptions to basic services, attributed to disasters

Proportion of municipal solid waste collected and managed in controlled facilities out of total municipal waste generated, by cities

By 2030, provide universal access to safe, inclusive and accessible, green and public spaces, in particular for women and children, older persons and persons with disabilities

Number of countries that have national urban policies or regional development plans that (a) respond to population dynamics; (b) ensure balanced territorial development; and (c) increase local fiscal space

By 2020, substantially increase the number of cities and human settlements adopting and implementing integrated policies and plans towards inclusion, resource efficiency, mitigation and adaptation to climate change, resilience to disasters, and develop and implement, in line with the Sendai Framework for Disaster Risk Reduction 2015-2030, holistic disaster risk management at all levels

As epicentres of the COVID-19 crisis, many cities have suffered from insufficiencies in public health systems, inadequate basic services, a lack of well-developed and integrated public transport systems and inadequate open public spaces, as well as from the economic consequences of lockdowns. As a result, the pandemic is likely to further increase the number of slum dwellers. In order to improve the lives of over 1 billion slum dwellers, there is an urgent need to focus on policies for improving health, affordable housing, basic services, sustainable mobility and connectivity.

Over the years, the number of slum dwellers has continued to grow and that number was over 1 billion in 2020. Slum dwellers are most prevalent in three regions, which are home to about 85 per cent of the world’s slum residents: Central and Southern Asia (359 million), Eastern and South-Eastern Asia (306 million) and sub-Saharan Africa (230 million).

Data for 2020 from 1,510 cities around the world indicate that on average only about 37 per cent of their urban areas are served by public transport, measured as a walking distance of 500 m to low-capacity transport systems (such as buses and trams) and/or 1,000 m to high-capacity systems (such as trains and ferries). Given variations in population concentrations within those cities, this translates into only about 52 per cent of the world population having convenient access to public transport.

Data for 2020 from 1,072 cities point to a poor distribution of open public spaces in most regions. In these cities, only about 38 per cent of urban areas are loca ted within a walking distance of 400 m to an open public space, which translates into only about 45 per cent of the global urban population having convenient access to those spaces.

By March 2021, a total of 156 countries had developed national urban policies, with almost half (74) already in the implementation stage. A further breakdown shows that 40 per cent of the countries are in the early stages of developing their plans, while 12 per cent are monitoring and evaluating how well those plans are functioning.

By the end of 2021, a total of 98 countries had reported having local governments with disaster risk reduction strategies, an increase from 51 countries in 2015.

Before the pandemic, cities had rising numbers of slum dwellers, worsening air pollution, minimal open public spaces and limited convenient access to public transport. The direct and indirect impacts of the COVID-19 pandemic are making it even more unlikely that this Goal will be achieved, with more people forced to live in slums, where quality of life is deteriorating and vulnerability increasing.

The number of slum dwellers has continued to grow over the years, exceeding 1 billion in 2018. Slum dwellers are most prevalent in the three regions of Eastern and South-Eastern Asia (370 million), sub-Saharan Africa (238 million) and Central and Southern Asia (226 million).

According to data from 2019 for 610 cities in 95 countries and territories, about half of the urban population has convenient access to public transport, defined as living within a walking distance of 500 metres to low-capacity transport systems, such as buses or trams, and 1,000 metres to high-capacity systems, such as trains and ferries. As a result of the COVID-19 response measures imposed in countries and territories throughout 2020, access to public transport in cities worldwide was significantly disrupted, from partial closures and reduced capacities to total closure of networks.

Data collected for a sample of 911 cities from 114 countries and territories in 2020 indicate that between 1990 and 2019, spatial urbanization occurred at a much faster rate than population growth, and smaller cities were being urbanized more quickly than their larger counterparts. On average, all regions except sub-Saharan Africa and Eastern and South-Eastern Asia recorded a consistent increase in built-up area per capita, with the highest values in Australia and New Zealand.

Data on a sample of 911 cities from 114 countries and territories indicate that the share of urban area allocated to streets and open public spaces averaged only about 16 per cent globally in 2020, well below the allocation recommended by United Nations Human Settlements Programme (UN-Habitat) of 30 per cent for streets and an additional 10 to 15 per cent for open public spaces.

Expert Group Meeting on SDG 11 (Sustainable cities) and its interlinkages with other SDGs; 8 – 9 February 2023, Bilbao, Spain