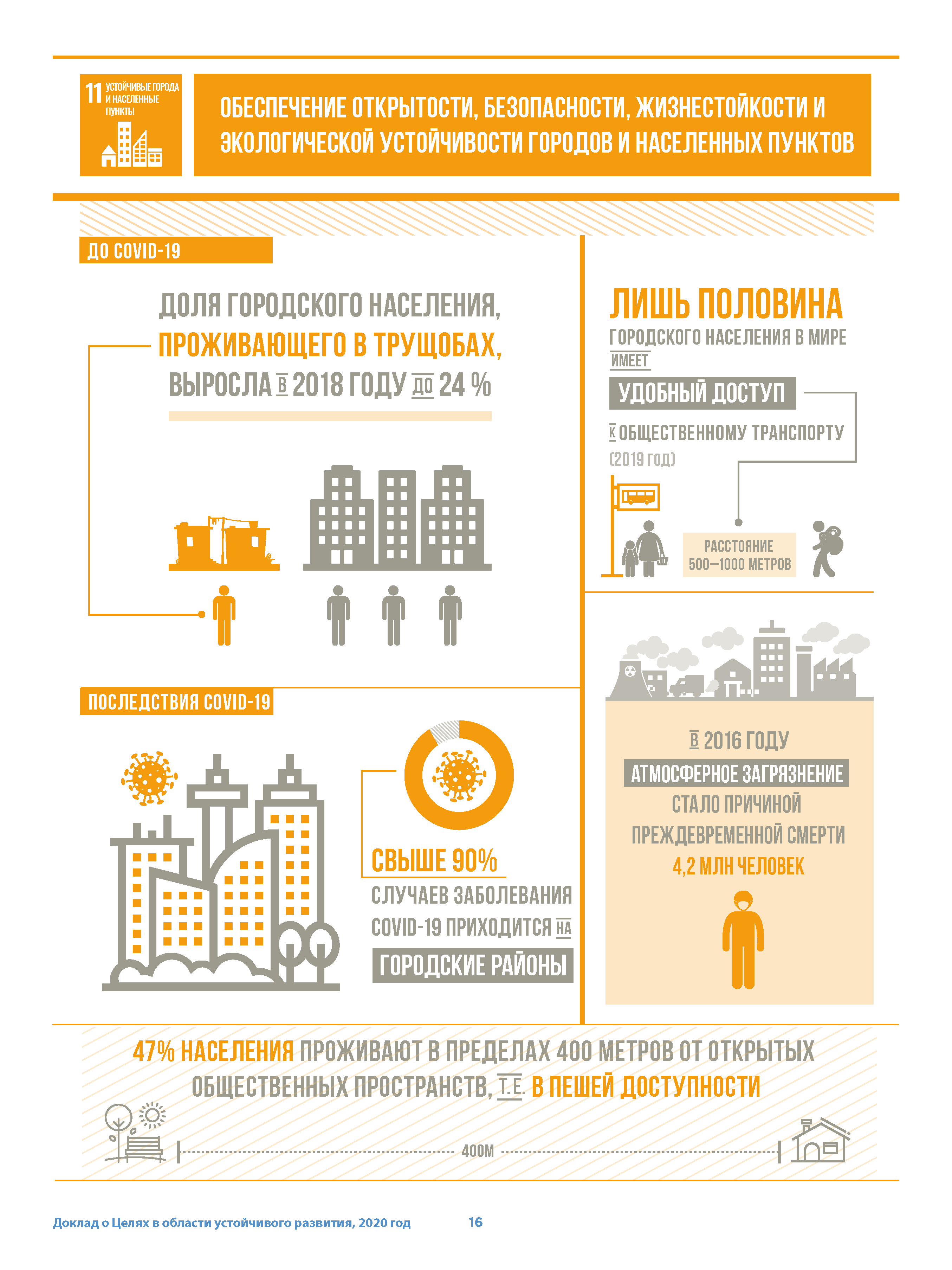 By 2030, provide access to safe, affordable, accessible and sustainable transport systems for all, improving road safety, notably by expanding public transport, with special attention to the needs of those in vulnerable situations, women, children, persons with disabilities and older persons

By 2030, enhance inclusive and sustainable urbanization and capacity for participatory, integrated and sustainable human settlement planning and management in all countries

By 2030, provide universal access to safe, inclusive and accessible, green and public spaces, in particular for women and children, older persons and persons with disabilities

By 2020, substantially increase the number of cities and human settlements adopting and implementing integrated policies and plans towards inclusion, resource efficiency, mitigation and adaptation to climate change, resilience to disasters, and develop and implement, in line with the Sendai Framework for Disaster Risk Reduction 2015-2030, holistic disaster risk management at all levels

Before the pandemic, cities experienced rising slum dweller populations, worsening air pollution, minimal open public spaces and limited convenient access to public transport. The COVID-19 direct and indirect impacts are making reaching the goal even more unlikely, with increases in the number of slum dwellers and those who have downgraded to live in slum-like conditions, while also worsening of the quality of life and vulnerabilities for those already living in slums.

Over the years, the number of slum dwellers continues to grow, reaching over 1 billion in 2018. Slum-dwellers are most prevalent in three regions-- Eastern and South-Eastern Asia (370 million), sub-Saharan Africa (238 million) and Central and Southern Asia (226 million).

According to 2019 data from 610 cities in 95 countries, about half of the urban population has convenient access to public transport, measured as living within 500 meters walking distance to low-capacity transport systems (like buses or trams) and 1,000 meters to high-capacity systems (such as trains and ferries). Due to COVID-19 response measures in countries throughout 2020,access to public transport in cities worldwide was significantly disrupted – from partial closures and guidelines on reduced capacities to total closure of networks.

Data collected from a sample of 911 cities from 114 countries in 2020 show that, through the 1990-2019 period, spatial urbanization is happening much faster than population growth, and smaller cities are urbanizing faster than bigger ones. On average, all regions except sub-Saharan Africa and Eastern and South-Eastern Asia recorded a consistent increase in the built-up area per capita, with Australia and New Zealand recording the highest values.

Data from a sample of 911 cities from 114 countries shows that in 2020, the share of urban area allocated to streets and open public spaces averages only about 16% globally, well below the UN-Habitat’s recommendations of 30% to street and an additional 10–15% to open public spaces.

As of March 2021, 156 countries have developed national urban policies, with almost half already in the implementation stage. A further breakdown shows that 38% of the countries are in the early stages of developing their plans, while 13% are monitoring and evaluating how well these plans are functioning.