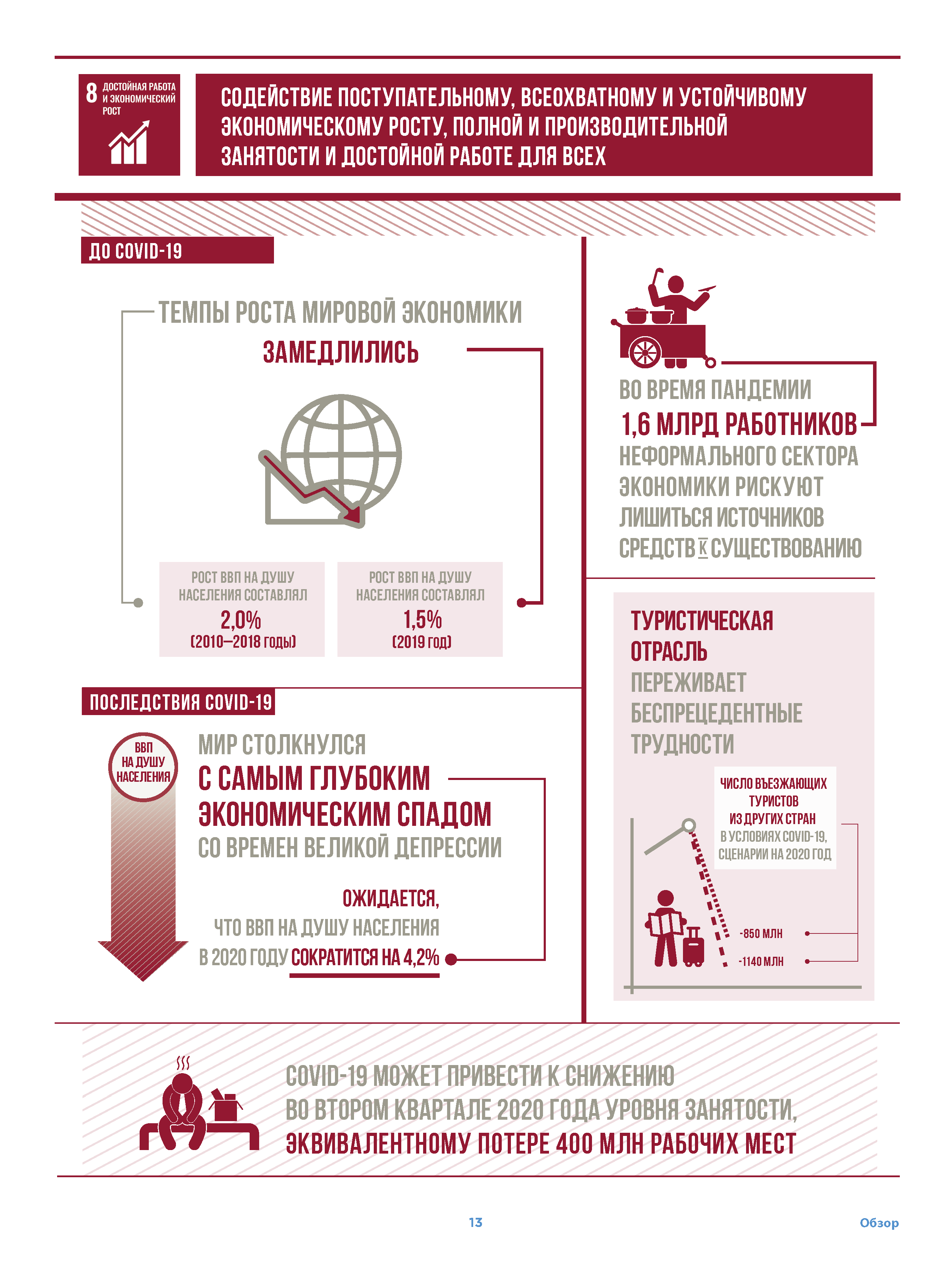 Sustain per capita economic growth in accordance with national circumstances and, in particular, at least 7 per cent gross domestic product growth per annum in the least developed countries

By 2030, achieve full and productive employment and decent work for all women and men, including for young people and persons with disabilities, and equal pay for work of equal value

By 2020, substantially reduce the proportion of youth not in employment, education or training

Protect labour rights and promote safe and secure working environments for all workers, including migrant workers, in particular women migrants, and those in precarious employment

Frequency rates of fatal and non-fatal occupational injuries, by sex and migrant status

Increase in national compliance of labour rights (freedom of association and collective bargaining) based on International Labour Organization (ILO) textual sources and national legislation, by sex and migrant status

By 2030, devise and implement policies to promote sustainable tourism that creates jobs and promotes local culture and products

Number of jobs in tourism industries as a proportion of total jobs and growth rate of jobs, by sex

Strengthen the capacity of domestic financial institutions to encourage and expand access to banking, insurance and financial services for all

Before the start of the COVID-19 pandemic in 2020, the average growth of the global economy had already slowed. The pandemic has caused the worst global economic recession since the Great Depression and has had a massive impact on working times and incomes. In 2020, 8.8 per cent of global working hours were lost compared to the figure for the fourth quarter of 2019, which is equivalent to 255 million full-time jobs and approximately four times greater than the hours lost during the global financial crisis in 2009. Young people and women in the workforce were hit particularly hard by the crisis in the labour market. The global economy is slowly recovering, although activity may remain below pre-pandemic levels for a prolonged period.

The real GDP of the least developed countries increased by 4.8 per cent in 2019 and is estimated to have fallen by 1.3 per cent in 2020 because of the disruption caused by the pandemic.

Before the onset of the pandemic, informal employment accounted for 60.2 per cent of global employment, equivalent to 2 billion people with informal jobs characterized by a lack of basic protection, including social protection coverage. More than three quarters, 1.6 billion informal workers, were significantly affected by the pandemic-related lockdown measures or were working in the sectors hardest hit.

They are at high risk of falling into poverty and will experience greater challenges in regaining their livelihoods during the recovery.

Global unemployment increased by 33 million in 2020, with the unemployment rate increasing by 1.1 percentage points to 6.5 per cent. However, unemployment figures reflect only a small proportion of the jobs lost as a result of the pandemic. A further 81 million people were not actively seeking employment or were simply unable to find employment owing to the COVID-19-related restrictions. Young people and women were particularly hard hit by the crisis, with employment losses in 2020 of 8.7 and 5 per cent, respectively, compared to 3.7 per cent for all adults and 3.9 per cent for men.

The level of national compliance with the fundamental labour rights of freedom of association and collective bargaining changed little between 2015 and 2018.

Global GDP from tourism increased at a higher rate than the rest of the economy over the decade preceding 2019 to account for 4.1 per cent of global GDP in 2019, compared to 3.7 per cent in 2008. However, as one of the sectors hardest hit by the pandemic, a reversal in this trend is expected for 2020 and the coming years. Globally, international arrivals decreased by 74 per cent in 2020 compared to 2019, which represents a loss of $1.3 trillion in inbound tourism expenditure, more than 11 times the loss resulting from the 2009 global crisis. An estimated 100 to 120 million tourism jobs are at risk because of the pandemic, with a disproportionate effect on women. While the tourism sectors of virtually all countries and territories in the world are affected, the small island developing States suffer most acutely.

Globally, the number of automated teller machines per 100,000 adults rose by more than 50 per cent during the past decade, from 45 in 2010 to 69 in 2019. However, there was a slight reversal in the trend for commercial bank branches, with the number of branches in 2019 marginally lower than that recorded in 2010.

In 2019, aid for trade commitments decreased by 6 per cent to $53 billion on the basis of current prices. The sectors most represented were energy (27.9 per cent of total aid for trade), transport and storage (22.6 per cent) and agriculture (17.8 per cent).

In 2020, almost one third of the 107 countries and territories with data had formulated and operationalized a youth employment strategy, while 44 (41.1 per cent) had such strategies but did not provide conclusive evidence of their implementation, and just under one quarter (24.3 per cent) were in the process of developing a strategy.