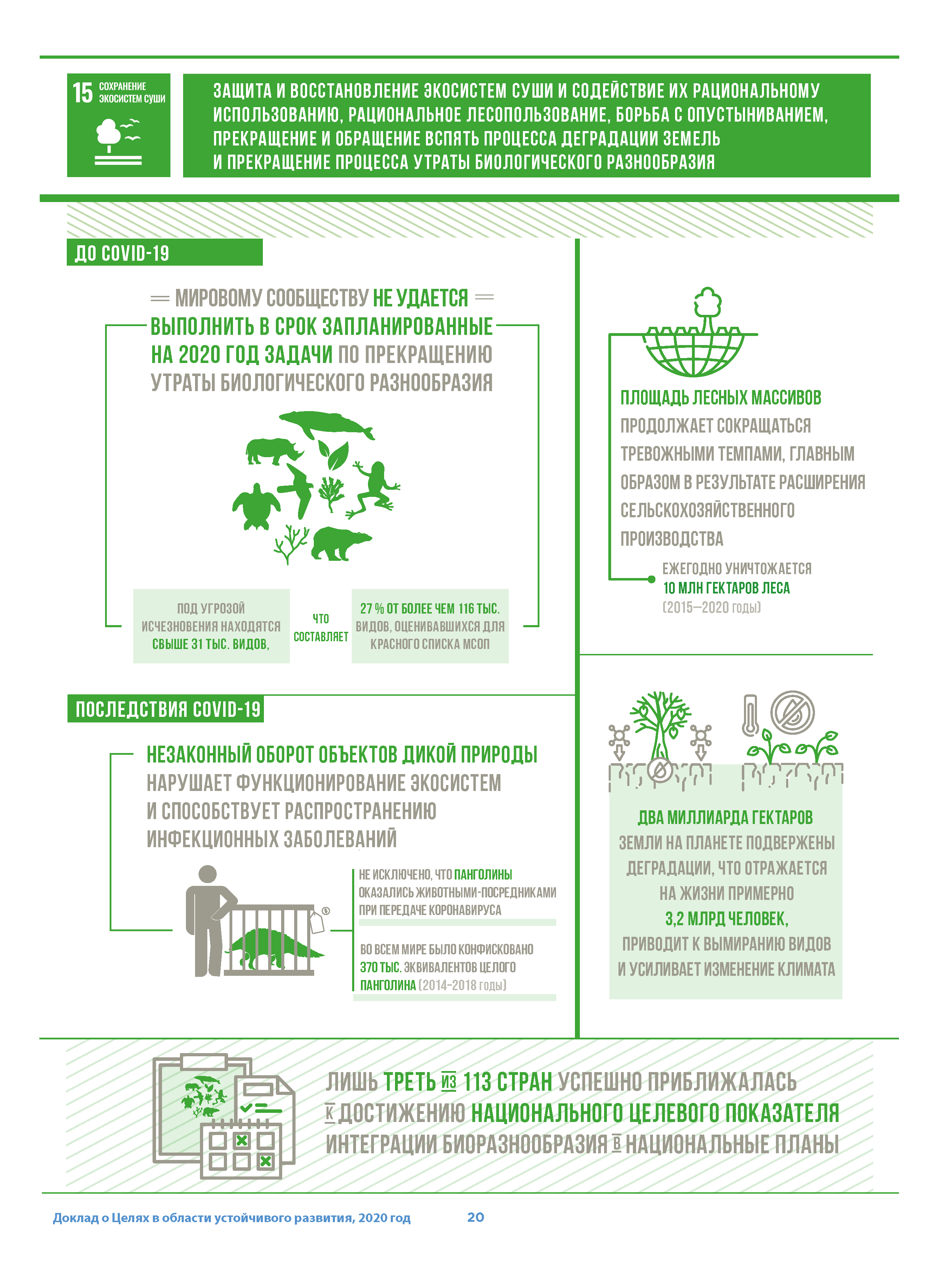 By 2020, ensure the conservation, restoration and sustainable use of terrestrial and inland freshwater ecosystems and their services, in particular forests, wetlands, mountains and drylands, in line with obligations under international agreements

By 2020, promote the implementation of sustainable management of all types of forests, halt deforestation, restore degraded forests and substantially increase afforestation and reforestation globally

By 2030, ensure the conservation of mountain ecosystems, including their biodiversity, in order to enhance their capacity to provide benefits that are essential for sustainable development

Take urgent and significant action to reduce the degradation of natural habitats, halt the loss of biodiversity and, by 2020, protect and prevent the extinction of threatened species

Promote fair and equitable sharing of the benefits arising from the utilization of genetic resources and promote appropriate access to such resources, as internationally agreed

By 2020, introduce measures to prevent the introduction and significantly reduce the impact of invasive alien species on land and water ecosystems and control or eradicate the priority species

Mobilize significant resources from all sources and at all levels to finance sustainable forest management and provide adequate incentives to developing countries to advance such management, including for conservation and reforestation

Deforestation and forest degradation, continued biodiversity loss and the ongoing degradation of ecosystems are having profound consequences for human well-being and survival. The world fell short on 2020 targets to halt biodiversity loss. The COVID-19 pandemic has shown that, by threatening biodiversity, humanity threatens its own survival. While great efforts are being made to expand sustainable forest management, increase coverage of key biodiversity areas and sign up t o legislation and treaties for protecting biodiversity and ecosystems, much more needs to be done to put the health of the planet at the centre of all plans and policies.

While the rate of deforestation in tropical regions has slowed in the past decad e, vigilance and targeted efforts are required to maintain this trend. The proportion of forest area fell from 31.9 per cent of total land area in 2000 to 31.2 per cent in 2020, representing a net loss of almost 100 million hectares of the world’s forests. From 2000 to 2020, forest area increased in Asia, Europe and Northern America, but decreased significantly in Latin America and sub-Saharan Africa. Despite the losses in forest cover, above-ground forest biomass per hectare, the proportion of forest area in protected areas and under long-term management plans, and certified forest area all increased or remained stable at the global level and in most of the regions of the world, demonstrating global progress towards sustainable forest management.

As of February 2021, 127 countries and territories had committed to setting voluntary targets for achieving land degradation neutrality, and 68 countries and territories had already officially endorsed their targets. Overall, commitments to la nd restoration are estimated to amount to 1 billion hectares, of which 450 million hectares are covered by commitments through land degradation neutrality targets.

Data based on satellite imagery reveal that green coverage (forests, grasslands, croplands and wetlands) of the world’s mountains remained steady at about 73 per cent between 2000 and 2018. Green cover tends to be greater in mountain areas that are less than 2,500 metres above sea level. However, mountain green cover varies considerably across geographical regions, ranging from 100 per cent in Oceania to 68 per cent in Northern Africa and Western Asia.

Globally, the risk of species extinction has increased by about 10 per cent over the past three decades. The Red List Index, which ranges from a value of 1 to indicate no risk of extinction to a value of 0 to indicate the extinction of all species, decreased from 0.81 in 1993 to 0.73 in 2021.

As at 1 February 2021, 128 countries, territories and the European Union had ratified the Nagoya Protocol on Access to Genetic Resources and the Fair and Equitable Sharing of Benefits Arising from their Utilization to the Convention on Biological Diversity, which is an increase of 60 countries and territories since 2016, and 67 countries, territories and the European Union have shared information on their Nagoya Protocol frameworks. There are now 148 parties to the International Treaty on Plant Genetic Resources for Food and Agriculture, and so far, 57 countries and territories have provided information about the measures that they have taken to implement the Nagoya Protocol.

The pandemic and the vast subsequent harm to human and economic well-being have starkly illustrated the potential global impact of zoonotic diseases, for which wildlife trade – both legal and illegal – is a potential vector. While certain markets for illegal wildlife products are declining, such as the market for ivory, which has decreased 3.5-fold since 2013, other species are under increasing threat as offenders shift their focus to more lucrative products, such as pangolin scales. In 2018, for example, there was a tenfold increase in the number of whole pangolin equivalents seized since 2014.

Nearly all countries and territories (98 per cent) have adopted national legislation for the prevention or control of invasive alien species, although there is wide variation in its coverage across sectors. The proportion of countries and territories aligning their targets for invasive alien species with global targets has increased, from 74 per cent in 2016 to 84 per cent in 2020.

As of March 2021, 89 countries and territories have implemented the system of environmental economic accounting, an increase of 29 per cent since 2017. Of these, 62 countries and territories (70 per cent) have integrated the system of accounting into their regular statistical production methods, and compile and publish the accounts on a regular basis.

In 2019, ODA from Development Assistance Committee members provided in support of biodiversity amounted to $6.6 billion, a decrease of 14 per cent in real terms compared to 2018. In 2021, a total of 232 biodiversity-relevant taxes are in force across 62 countries and territories.