Reduce inequality within and among countries 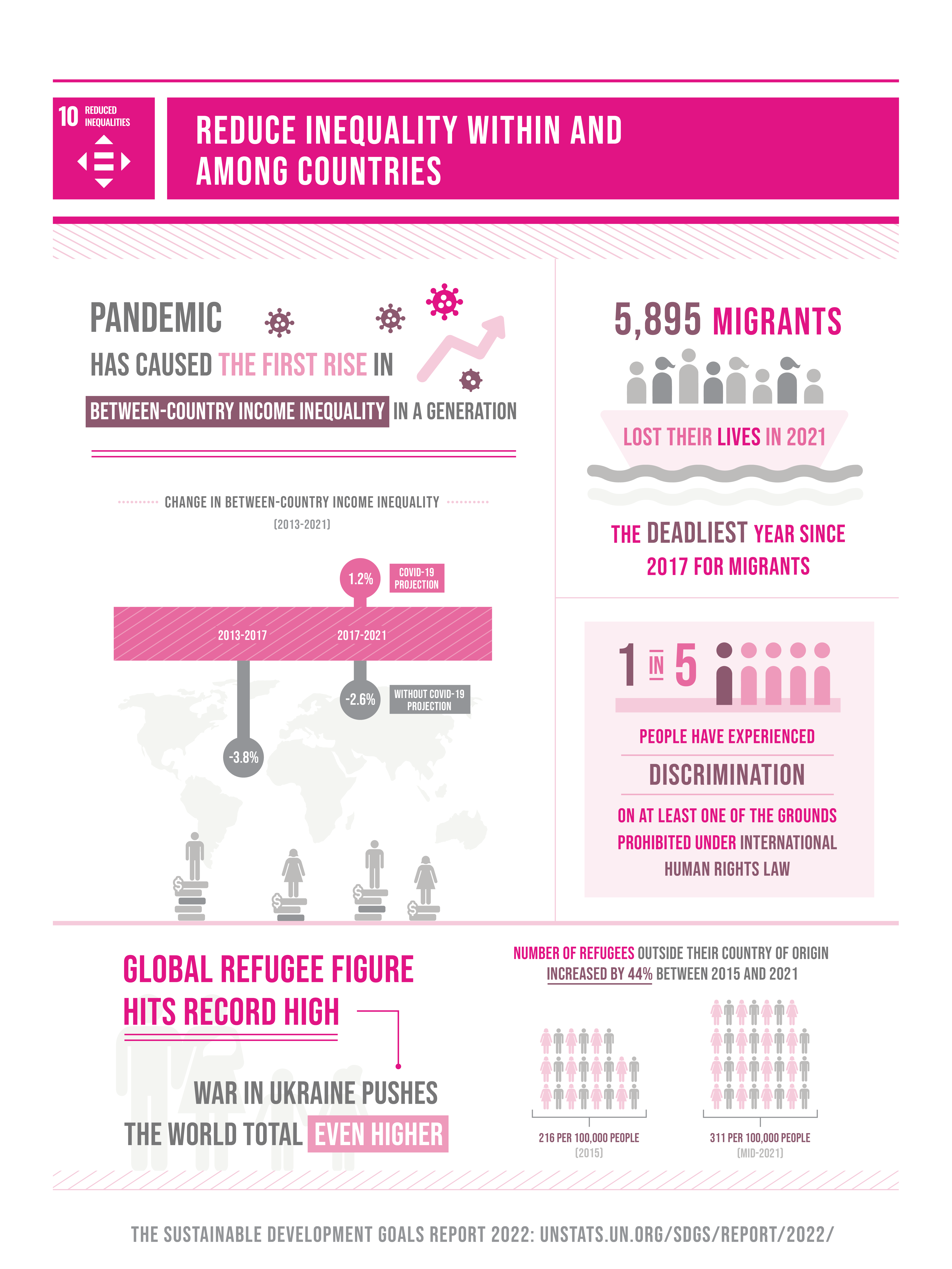 Proportion of people living below 50 per cent of median income, by sex, age and persons with disabilities

Number of countries with migration policies that facilitate orderly, safe, regular and responsible migration and mobility of people

Proportion of the population who are refugees, by country of origin

The COVID-19 crisis has exacerbated global income inequality, partly reversing the decline of the previous two decades. Weak recoveries in emerging markets and developing economies are expected to raise between-country inequality. Globally, the absolute number of refugees in 2021 was the highest on record. The war in Ukraine is creating one of the largest refugee crises of modern times.

Prior to the outbreak of the COVID-19 pandemic, more than three fifths of countries with available data saw higher growth in household expenditure or income per capita among the bottom 40 per cent of the population than the national average. The pandemic is threatening to reverse this trend. In 2020 many countries saw declines in growth among the bottom 40 per cent of greater magnitude than the national average.

Banks’ profitability weakened in 2020 mostly because of the COVID-19 pandemic, although reported asset quality remained good. Based on financial soundness indicators data for 2015–2020, the fraction of countries reporting return on assets above 1.0 per cent declined to 48 per cent in 2020 from 72 per cent in 2019 and the median return on assets declined from 1.5 per cent to 1.0 per cent.

The International Organization for Migration Missing Migrants Project recorded 5,895 deaths on migratory routes worldwide in 2021, a number surpassing pre-pandemic figures and making 2021 the deadliest year on record for migrants since 2017.

By mid-2021, the number of people who were forced to flee their countries owing to war, conflict, persecution, human rights violations or events causing serious disturbances of public order had grown to 24.5 million, the highest absolute number on record. For every 100,000 people, 311 are refugees outside their country of origin, an increase from 216 in 2015. In addition, as at 12 April 2022, about 4.7 million refugees from Ukraine had crossed borders into neighbouring countries.

Globally, in 2021, 62.3 per cent of 138 countries with data reported having a wide range of policies to facilitate orderly, safe, regular and responsible migration and mobility of people, meaning that they had policy measures for 80 per cent or more of the 30 subcategories under the six domains of the indicator.

The proportions of tariff lines applied to imports admitted duty-free from least developed countries, small island developing States and developing countries have remained relatively stable in recent years, at around 64.5 per cent, 65 per cent and 51 per cent, respectively.

According to estimates of the International Monetary Fund, the COVID-19 pandemic would increase the average Gini index for emerging market and developing economies by more than 6 per cent, with an even larger impact predicted for lowincome countries and territories.

Data from 44 countries and territories for the period 2014–2020 show that almost one in five people reported having personally experienced discrimination on at least one of the grounds prohibited under international human rights law. Moreover, women were more likely to be victims of discrimination than men. The health and socioeconomic situations of many groups already experiencing higher levels of discrimination have been further affected by the pandemic.

In 2020, 4,186 deaths and disappearances were recorded along migratory routes worldwide, with an increase in fatalities on some routes. Despite the pandemic and mobility restrictions at borders across the world, tens of thousands of people continued to leave their homes and embark on dangerous journeys across deserts and seas.

By mid-2020, the number of people who had fled their countries and territories and become refugees owing to war, conflict, persecution, human rights violations and events seriously disturbing public order had grown to 24 million, the highest number on record. The number of refugees outside their country of origin has risen to 307 out of every 100,000 persons, more than double the figure at the end of 2010.

Globally, in 2019, 54 per cent of the 111 Governments with data reported having instituted a comprehensive set of policy measures to facilitate orderly, safe, regular and responsible migration and mobility of people, which means that they have reported having policy measures in place for at least 80 per cent of the subcategories that make up the six policy domains of this indicator. The degree to which the policy measures were reported, however, varies widely across policy domains, with most countries and territories reporting measures for cooperation and partnerships and for safe, orderly and regular migration, and fewest countries and territories reporting measures for migrant rights and for socioeconomic well-being.

From 2017 to 2020, the proportion of products exported by the least developed countries and developing countries that receive duty-free treatment has remained unchanged at 66 and 52 per cent, respectively.

In 2019, total resource flows for development to developing countries from Development Assistance Committee donors, multilateral agencies and other key providers amounted to $400 billion, of which $164 billion was ODA.

The average global cost of sending a $200 remittance decreased from 9.3 per cent in 2011 to 6.5 per cent in 2020, bringing it closer to the international target of 5 per cent. The average annual decrease was 0.31 percentage points.

Study Tour of the Ministry of Trade, Industry, Regional Integration and Employment (MOTIE), The Gambia, to Dakar, Senegal on Expanding Roles of Micro-, Small and Medium-sized Enterprises (MSMEs) in Achieving SDGs in The Gambia