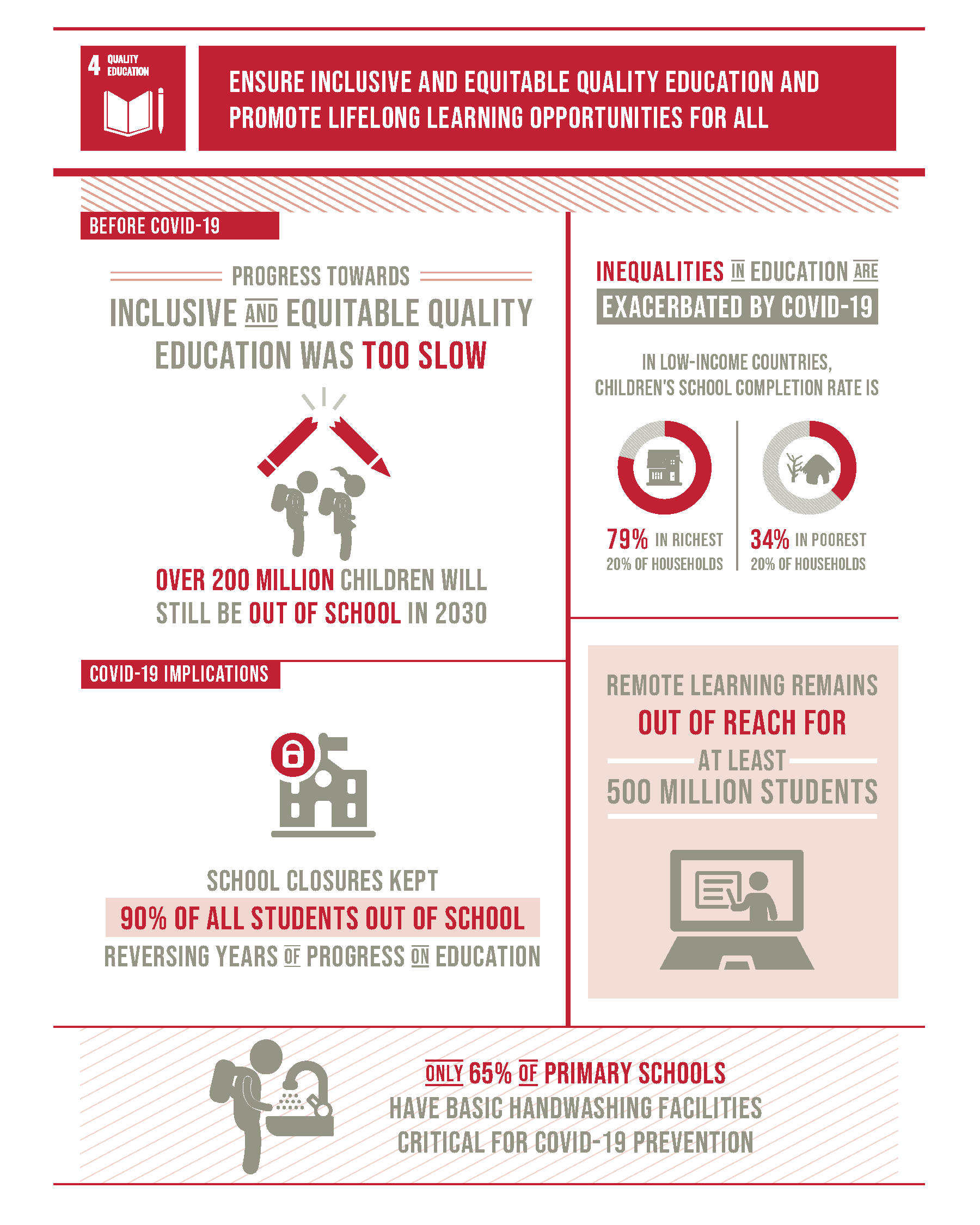 By 2030, ensure that all girls and boys complete free, equitable and quality primary and secondary education leading to relevant and effective learning outcomes

Proportion of children and young people: (a) in grades 2/3; (b) at the end of primary; and (c) at the end of lower secondary achieving at least a minimum proficiency level in (i) reading and (ii) mathematics, by sex

Proportion of children under 5 years of age who are developmentally on track in health, learning and psychosocial well-being, by sex

Participation rate in organized learning (one year before the official primary entry age), by sex

By 2030, ensure equal access for all women and men to affordable and quality technical, vocational and tertiary education, including university

Participation rate of youth and adults in formal and non-formal education and training in the previous 12 months, by sex

By 2030, substantially increase the number of youth and adults who have relevant skills, including technical and vocational skills, for employment, decent jobs and entrepreneurship

Proportion of youth and adults with information and communications technology (ICT) skills, by type of skill

By 2030, eliminate gender disparities in education and ensure equal access to all levels of education and vocational training for the vulnerable, including persons with disabilities, indigenous peoples and children in vulnerable situations

Parity indices (female/male, rural/urban, bottom/top wealth quintile and others such as disability status, indigenous peoples and conflict-affected, as data become available) for all education indicators on this list that can be disaggregated

By 2030, ensure that all youth and a substantial proportion of adults, both men and women, achieve literacy and numeracy

Percentage of population in a given age group achieving at least a fixed level of proficiency in functional (a) literacy and (b) numeracy skills, by sex

Extent to which (i) global citizenship education and (ii) education for sustainable development, including gender equality and human rights, are mainstreamed at all levels in: (a) national education policies, (b) curricula, (c) teacher education and (d) student assessment

Build and upgrade education facilities that are child, disability and gender sensitive and provide safe, non-violent, inclusive and effective learning environments for all

Proportion of teachers in: (a) pre-primary; (b) primary; (c) lower secondary; and (d) upper secondary education who have received at least the minimum organized teacher training (e.g. pedagogical training) pre-service or in-service required for teaching at the relevant level in a given country

In 74 countries with comparable data for the 2011–2019 period, around 7 in 10 children 3 and 4 years of age were on track developmentally in at least three of the following domains: literacy-numeracy, physical development, social-emotional development and learning.

Participation in organized learning one year before the official primary age of entry grew steadily, from 62 per cent in 2010 to 67 per cent in 2018. However, variation among countries is still wide, with values ranging from 9 to nearly 100 per cent.

In 2018, some 773 million adults, two thirds of them women, remained illiterate in terms of reading and writing skills. The global adult literacy rate, for the population 15 years of age and older, was 86 per cent in 2018, while the youth literacy rate, for the population 15 to 24 years of age, was 92 per cent. Southern Asia is home to nearly half of the global illiterate population, and sub-Saharan Africa is home to one quarter thereof.

In 2019, less than one half of primary and lower secondary schools in subSaharan Africa had access to electricity, the Internet, computers and basic handwashing facilities, key basic services and facilities necessary to ensure a safe and effective learning environment for all students.

Based on data from 129 countries, the percentage of primary school teachers receiving the minimum pedagogical training according to national standards throughout the world has stagnated at 85 per cent since 2015. The percentage is lowest in sub-Saharan Africa (64 per cent) and Southern Asia (72 per cent).

Despite the considerable progress on education access and participation over the past years, 262 million children and youth aged 6 to 17 were still out of school in 2017, and more than half of children and adolescents are not meeting minimum proficiency standards in reading and mathematics. Rapid technological changes present opportunities and challenges, but the learning environment, the capacities of teachers and the quality of education have not kept pace. Refocused efforts are needed to improve learning outcomes for the full life cycle, especially for women, girls and marginalized people in vulnerable settings.

More than half of children and adolescents worldwide are not meeting minimum proficiency standards in reading and mathematics. Refocused efforts are needed to improve the quality of education. Disparities in education along the lines of gender, urban-rural location and other dimensions still run deep, and more investments in education infrastructure are required, particularly in LDCs.

Achieving inclusive and equitable quality education for all will require increasing efforts, especially in sub-Saharan Africa and Southern Asia and for vulnerable populations, including persons with disabilities, indigenous people, refugee children and poor children in rural areas.

Stakeholder Engagement and the 2030 Agenda: A Practical Guide

Statement to the Education post-COVID-19: Extraordinary session of the Global Education Meeting