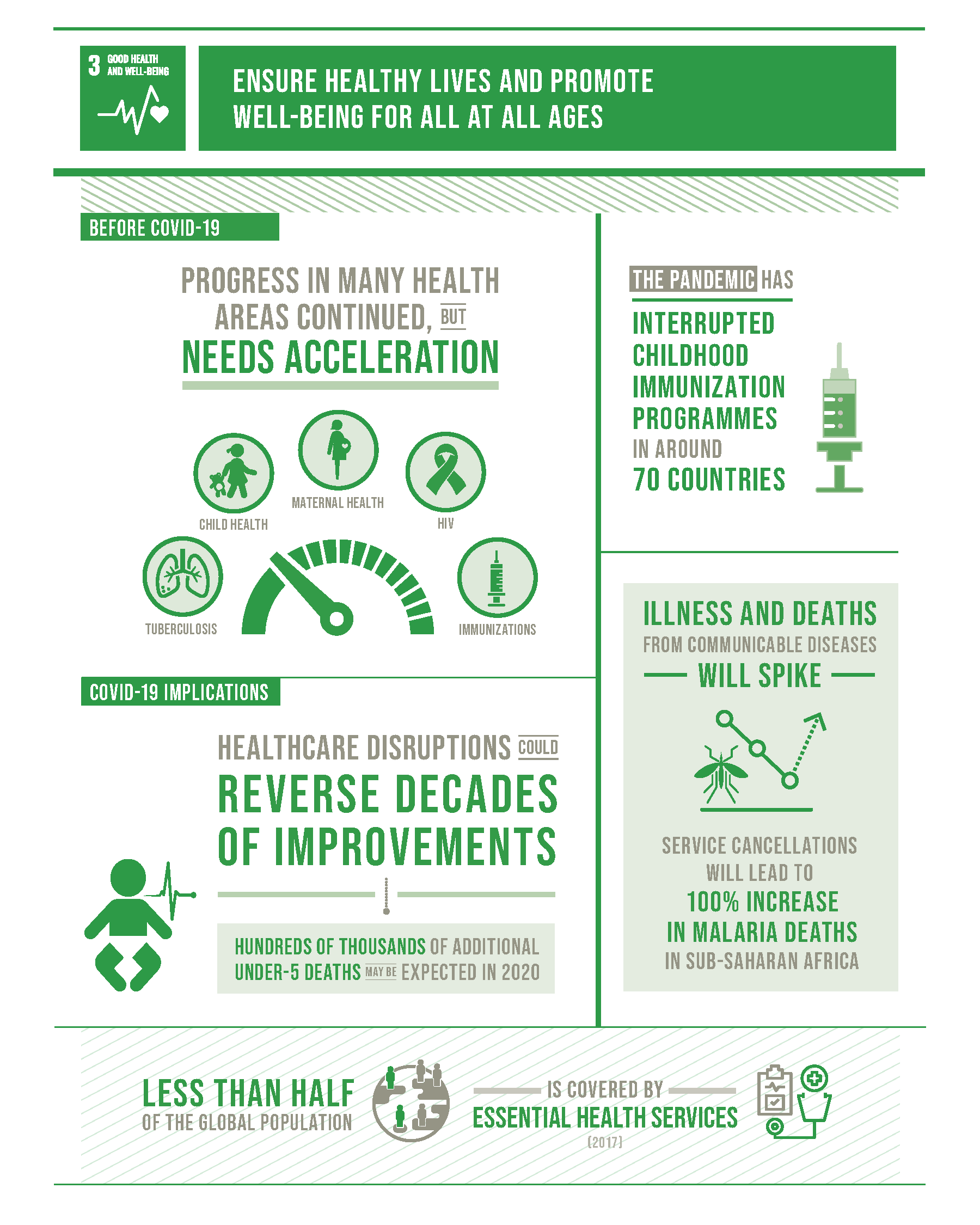 By 2030, end the epidemics of AIDS, tuberculosis, malaria and neglected tropical diseases and combat hepatitis, water-borne diseases and other communicable diseases

Hepatitis B incidence per 100,000 population

By 2030, reduce by one third premature mortality from non-communicable diseases through prevention and treatment and promote mental health and well-being

Strengthen the prevention and treatment of substance abuse, including narcotic drug abuse and harmful use of alcohol

Coverage of treatment interventions (pharmacological, psychosocial and rehabilitation and aftercare services) for substance use disorders

Harmful use of alcohol, defined according to the national context as alcohol per capita consumption (aged 15 years and older) within a calendar year in litres of pure alcohol

By 2020, halve the number of global deaths and injuries from road traffic accidents

Coverage of essential health services (defined as the average coverage of essential services based on tracer interventions that include reproductive, maternal, newborn and child health, infectious diseases, non-communicable diseases and service capacity and access, among the general and the most disadvantaged population)

By 2030, substantially reduce the number of deaths and illnesses from hazardous chemicals and air, water and soil pollution and contamination

Mortality rate attributed to unsafe water, unsafe sanitation and lack of hygiene (exposure to unsafe Water, Sanitation and Hygiene for All (WASH) services)

Strengthen the implementation of the World Health Organization Framework Convention on Tobacco Control in all countries, as appropriate

Support the research and development of vaccines and medicines for the communicable and non-communicable diseases that primarily affect developing countries, provide access to affordable essential medicines and vaccines, in accordance with the Doha Declaration on the TRIPS Agreement and Public Health, which affirms the right of developing countries to use to the full the provisions in the Agreement on Trade-Related Aspects of Intellectual Property Rights regarding flexibilities to protect public health, and, in particular, provide access to medicines for all

Strengthen the capacity of all countries, in particular developing countries, for early warning, risk reduction and management of national and global health risks

Progress in many health areas continues, but the rate of improvement has slowed and will not be sufficient to meet most of the Goal 3 targets. The pandemic is devastating health systems globally and threatens health outcomes already achieved. Most countries, in particular poor ones, have insufficient health facilities, medical supplies and health-care workers to meet the surge in demand. Countries need comprehensive health strategies and increased spending on health systems to meet urgent needs and protect health workers, while a global coordinated effort is needed to support countries in need.

Globally, an estimated 295,000 maternal deaths occurred in 2017, resulting in an overall maternal mortality ratio of 211 maternal deaths per 100,000 live births, a 4 per cent reduction compared with 2015 and a 38 per cent reduction compared with 2000. The majority of the deaths occurred in low- and lower-middle-income countries, and roughly 66 per cent of them occurred in sub-Saharan Africa. At the current pace of progress, the world will fall short of the target of the Goal.

Worldwide, 81 per cent of births were assisted by skilled health professionals in the period 2014–2019, up from 64 per cent in the period 2000–2005, with Central Asia, Eastern Asia, Western Asia, Northern America and Europe nearly achieving universal coverage.

The concerted effort of the global community continues to reduce preventable child deaths, from a mortality rate of 76 deaths per 1,000 live births in children under 5 years of age in 2000 to 42 in 2015 to 39 in 2018. Notwithstanding the progress, some 5.3 million children died before reaching 5 years of age in 2018 alone, and nearly half of those deaths, or 2.5 million, occurred in the first month of life.

Globally, the proportion of women of reproductive age (15 to 49 years) whose family planning needs were met by modern contraceptive methods increased only slightly, from 75.7 per cent in 2010 to around 77 per cent from 2015 to 2020, reaching only 56 per cent in sub-Saharan Africa and 52 per cent in Oceania (excluding Australia and New Zealand).

In 2018, there were an estimated 1.7 million new HIV infections, an incidence rate of 0.24 per 1,000 uninfected persons among the total population, almost unchanged from the level of 0.26 per 1,000 in 2015, putting the world off track in achieving the Sustainable Development Goal target. One in three of new HIV infections globally occurred among women 15 to 49 years of age in sub-Saharan Africa.

In 2018, an estimated 10 million persons fell ill with tuberculosis (89 per cent were adults, 63 per cent were men and 8.6 per cent were people living with HIV). The incidence of tuberculosis declined, from 141 new and relapse cases per 100,000 persons in 2015 to 132 in 2018. The tuberculosis mortality rate among HIV-negative people fell by 8.3 per cent in the same period. However, large gaps in detection and treatment persist, and the current pace of progress is not fast enough to meet the target of ending the epidemic by 2030. Drug-resistant tuberculosis is also a continuing threat.

After many years of impressive reductions in the global malaria burden, progress has stalled. Globally, malaria incidence (the number of cases per 1,000 persons) fell, from 81 in 2000 to 57 in 2014, and remained at a similar level throughout 2018. The world is not on a trajectory to achieve the Sustainable Development Goal target of ending malaria.

The use of the hepatitis B vaccine in infants has reduced the incidence of new chronic hepatitis B virus infections considerably. The proportion of children under 5 years of age who became chronically infected fell, from 4.7 per cent in the pre-vaccine era to 0.9 per cent in 2018.

In 2018, 1.76 billion persons were reported to have required mass or individual treatment and care for neglected tropical diseases, down from 1.80 billion in 2015 and 2.19 billion in 2010. The 530 million persons requiring treatment and care in least developed countries represented 52 per cent of the population of those countries, down from 78 per cent in 2010. Progress has been driven largely by the fact that at least one neglected tropical disease has been eliminated in 40 countries.

The probability of dying from cardiovascular disease, cancer, diabetes or chronic respiratory disease at between 30 and 70 years of age decreased, from 19 per cent in 2010 to 18 per cent in 2016, a rate of decline that was insufficient to meet the Sustainable Development Goal target.

Based on 2016 data, nearly 800,000 persons died every year by suicide, and 79 per cent of global suicides occurred in low- and middle-income countries.

The number of persons dying of tobacco-related illnesses was estimated to be 8.1 million in 2017. The global prevalence of tobacco use among men was 38.6 per cent in 2018, compared with 8.5 per cent among women.

In 2016, indoor (household) and outdoor (ambient) air pollution caused some 7 million deaths worldwide. Inadequate water, sanitation and hygiene led to a total of 870,000 deaths in the same year.

Immunization is one of the world’s most successful and cost-effective health interventions. While vaccination coverage among infants increased, from 72 to 85 to 86 per cent in 2000, 2015 and 2018, respectively, an estimated 19.4 million children did not receive essential vaccines in their first year of life. In addition, global coverage levels of the pneumococcal conjugate vaccine, which has the potential to reduce pneumonia significantly, have yet to reach 50 per cent coverage. Measles is a highly contagious disease, and the 69 per cent coverage of the two-dose vaccine in 2018 was insufficient to prevent a measles outbreak.

Official development assistance (ODA) for basic health from all donors increased by 41 per cent in real terms since 2010, reaching $10 billion in 2018. In 2018, about $1.7 billion was spent on malaria control, $0.8 billion on tuberculosis control and $1.9 billion on other infectious diseases, excluding HIV/AIDS.

In 2019, 166 countries reported the status of their capacity to implement the International Health Regulations with regard to preparedness for detecting, reporting and responding to health emergencies such as COVID-19. Analysis shows that steady progress has been made in nearly every core capacity of the Regulations, except in human resources, compared with 2018.

Major progress has been made in improving the health of millions of people, increasing life expectancy, reducing maternal and child mortality and fighting against leading communicable diseases. However, progress has stalled or is not happening fast enough with regard to addressing major diseases, such as malaria and tuberculosis, while at least half the global population does not have access to essential health services and many of those who do suffer undue financial hardship, potentially pushing them into extreme poverty. Concerted efforts are required to achieve universal health coverage and sustainable financing for health, to address the growing burden of non-communicable diseases, including mental health, and to tackle antimicrobial resistance and determinants of health such as air pollution and inadequate water and sanitation.

Many more people today are living healthier lives than in the past decade. Nevertheless, people are still suffering needlessly from preventable diseases, and too many are dying prematurely. Overcoming disease and ill health will require concerted and sustained efforts, focusing on population groups and regions that have been neglected.

Since 2000, impressive advancements have been made on many health fronts. However, to meet the Sustainable Development Goals health targets by 2030, progress must be accelerated, in particular in regions with the highest burden of disease.

Dispatches from the Field: Scientists, experts and policy makers addressing the Covid-19 crisis around the world