Publication - WHO Manifesto for a Healthy Recovery from COVID-19

COVID-19 is the greatest global shock in decades. Hundreds of thousands of lives have been lost, and the world’s economy likely faces the worst recession since the 1930s. The resulting loss of employment and income will cause further damage to livelihoods, health, and sustainable development.

Societies need to protect themselves, and to recover, as quickly as possible. Once human-to-human transmission of COVID-19 began, national and international surveillance and response systems were not strong or fast enough to completely halt transmission. And as infections spread, a lack of universal health coverage has left billions of people. Massive inequalities have meant that deaths and loss of livelihoods have been strongly driven by socioeconomic status, often compounded by gender and minority status.

View PDF: Publication - WHO Manifesto for a Healthy Recovery from COVID-19.pdf 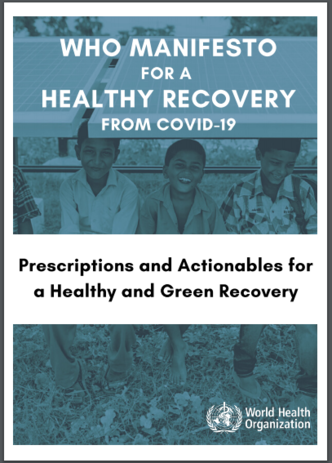