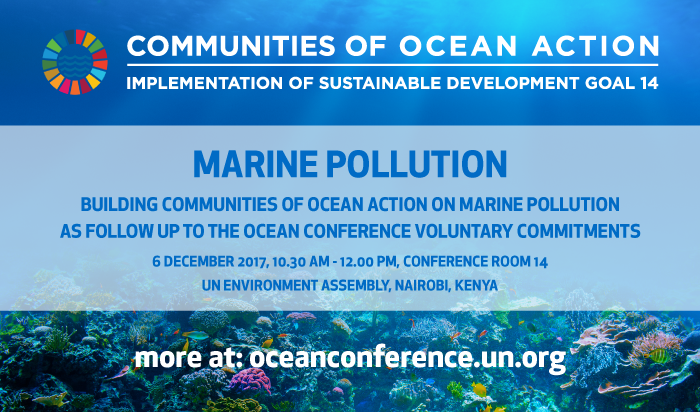 At The Ocean Conference, held in June 2017 at UN headquarters in New York to further implementation of Sustainable Development Goal 14 aimed at conserving and sustainably use the oceans, seas and marine resources, close to 1,400 voluntary commitments for concrete ocean action were made by governments, the United Nations system, civil society organizations, academia, the scientific community, and the private sector. These commitments, together with the Conference outcome document Our Ocean, Our Future: Call for Action, mark a global breakthrough on the path for the health of our oceans and seas.

To follow-up on the implementation of those voluntary commitments, the United Nations Department of Economic and Social Affairs (UN DESA) and the UN Secretary-General’s Special Envoy for the Ocean, Ambassador Peter Thomson, have launched nine thematic multistakeholder Communities of Ocean Action to spur further action in the area of Goal 14, and to maintain momentum until the next Ocean Conference, anticipated to be held in 2020.

Each Community of Ocean Action is coordinated by a set of designated focal points, drawn from representatives from the UN system and civil society, including UN Environment, United Nations Development Programme (UNDP), Food and Agriculture Organization (FAO), UN Office of Legal Affairs (OLA), International Maritime Organization, Ocean Conservancy, Global Environment Facility (GEF), Convention on Biological Diversity (CBD), among other entities and organizations. On 6 December 2017, on the occasion of the 2017 UN Environment Assembly (UNEA) in Nairobi, Kenya - the world's highest-level decision-making body on the environment -, a first gathering of the Communities of Ocean Action related to Marine Pollution was held.

Marine pollution, which is addressed by target 14.1, is one of the areas which received most attention in the process, with over 550 commitments announced, addressing measures such as reducing or banning plastic bags, bottles, straws, micro beads in cosmetics, organizing coastal and ocean clean ups, addressing abandoned, lost and discarded fishing gear - so called ghost nets –, addressing pollution from shipping industry, better nutrient management, raising ocean awareness and engaging in scientific research related to marine litter and plastics.

At the meeting, UN DESA announced the launch of the new revamped Ocean Conference Voluntary Commitments Registry, available at oceanconference.un.org, which now provides a platform for all stakeholders to report on their commitments, and for sharing of knowledge and best practices within and across the nine Communities of Ocean Action. UN Environment noted that the Clean Seas Campaign – one of the first voluntary commitment announced for The Ocean Conference – has generated thousands of pledges from NGOs and individuals to beat pollution, together with almost 40 national pledges, leading to many countries banning plastics as a concrete step to combat marine litter. UN Environment, who is the focal point for the Community of Ocean Action on Coral Reefs, drew to the attention of participants that 2018 will be the International Year of the Reef, which will provide an opportunity to strengthen awareness globally about the value of, and threats to, coral reefs and associated ecosystems and promote partnerships between governments, the private sector, academia and civil society on the management of coral reefs.

The head of Secretariat of the Pacific Regional Environment Programme (SPREP) noted that in the Pacific islands region the Cleaner Pacific 2025 strategy has been developed to address waste, chemicals and pollutants that will reduce associated threats to sustainable development of the region. The Ocean Conservancy - one of the focal points for the Community of Ocean Action on Marine Pollution - announced a new commitment, in partnership with Trash Free Seas Alliance, 3M, PepsiCo, Procter & Gamble, The Coca-Cola Company, the World Plastics Council, and the American Chemistry Council, in launching Closed Loop Oceans, an initiative to raise USD 150 million to finance solutions to ocean plastic in Southeast Asia.

Many participants expressed the need to further raise global basic awareness on ocean issues - – or ocean literacy - for all people, in particular children and youth, on how our day-to-day actions have a cumulative effect on the health of the ocean and seas, to build basic understanding of the ocean’s influence on us and our influence on the ocean.

In closing the event, Seychelles and Sweden expressed great appreciation to the fact that ocean action has finally reached global reach, and urged all Communities of Ocean Action to stay on course and remain engaged in the process.

The nine multi-stakeholder Communities of Ocean Action are:

All stakeholders committed to Ocean Action for advancing Sustainable Development Goal 14 are welcome to join the Communities of Ocean Actions by registering a voluntary commitment.