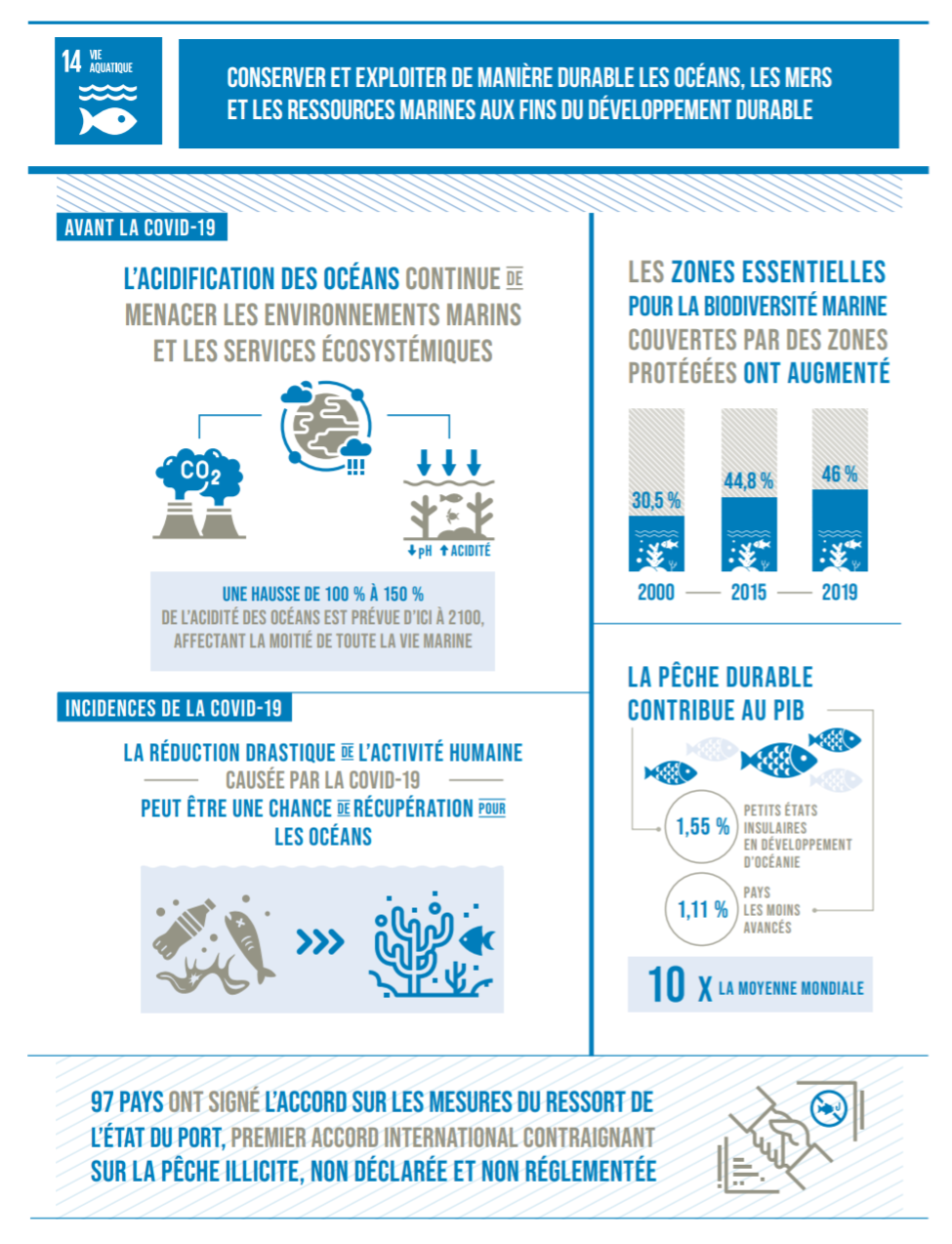 By 2025, prevent and significantly reduce marine pollution of all kinds, in particular from land-based activities, including marine debris and nutrient pollution

By 2020, sustainably manage and protect marine and coastal ecosystems to avoid significant adverse impacts, including by strengthening their resilience, and take action for their restoration in order to achieve healthy and productive oceans

Minimize and address the impacts of ocean acidification, including through enhanced scientific cooperation at all levels

By 2020, effectively regulate harvesting and end overfishing, illegal, unreported and unregulated fishing and destructive fishing practices and implement science-based management plans, in order to restore fish stocks in the shortest time feasible, at least to levels that can produce maximum sustainable yield as determined by their biological characteristics

By 2020, conserve at least 10 per cent of coastal and marine areas, consistent with national and international law and based on the best available scientific information

Coverage of protected areas in relation to marine areas

By 2020, prohibit certain forms of fisheries subsidies which contribute to overcapacity and overfishing, eliminate subsidies that contribute to illegal, unreported and unregulated fishing and refrain from introducing new such subsidies, recognizing that appropriate and effective special and differential treatment for developing and least developed countries should be an integral part of the World Trade Organization fisheries subsidies negotiation

Progress by countries in the degree of implementation of international instruments aiming to combat illegal, unreported and unregulated fishing

By 2030, increase the economic benefits to Small Island developing States and least developed countries from the sustainable use of marine resources, including through sustainable management of fisheries, aquaculture and tourism

Sustainable fisheries as a percentage of GDP in small island developing States, least developed countries and all countries

Increase scientific knowledge, develop research capacity and transfer marine technology, taking into account the Intergovernmental Oceanographic Commission Criteria and Guidelines on the Transfer of Marine Technology, in order to improve ocean health and to enhance the contribution of marine biodiversity to the development of developing countries, in particular small island developing States and least developed countries

Number of countries making progress in ratifying, accepting and implementing through legal, policy and institutional frameworks, ocean-related instruments that implement international law, as reflected in the United Nation Convention on the Law of the Sea, for the conservation and sustainable use of the oceans and their resources

More than three billion people rely on the ocean for their livelihoods and more than 80% of world merchandise trade by volume is carried by sea. The vast oceans, seas and marine resources are under continual threat from pollution, warming and acidification that are disrupting marine ecosystems and the communities they support. These changes have longterm repercussions that require urgently scaling up protection of marine environments, investment in ocean science and support for small-scale fishery communities and the sustainable management of the oceans.

While efforts to reduce nutrient inputs into coastal zones are showing success in some regions, algal blooms indicate that coastal eutrophication continues to be a challenge. Globally, chlorophyll-a (the pigment responsible for photosynthesis in all plants and algae) anomalies in country exclusive economic zones decreased by 20% from 2018 to 2020.

Ocean acidification is caused by the uptake of atmospheric CO2 by the ocean, resulting in a decreasing pH and acidification of the ocean, threatening marine organisms and ocean services. A limited set of long-term observation sites in the open ocean have shown a continuous decline in pH over the last 20 to 30 years.

Mean protected area coverage of marine Key Biodiversity Areas increased globally from 28% in 2000 to 44% in 2020. However, there is considerable spatial variation in this progress, with coverage still less than a quarter in Oceania (excluding Australia and New Zealand).

Improved regulations, together with effective monitoring and surveillance, have proven successful in reverting overfished stocks to biologically sustainable levels. However, the adoption of such measures has generally been slow, particularly in many developing countries. In thirteen countries that have active assessment and management systems in place, the proportion of fish stock within biologically sustainable levels is higher than the world average of 65.8% based on data collected in 2019.

Between 2018 and 2020, the world has made progress in implementing regulatory and institutional frameworks that recognize and protect access rights for small-scale fisheries, with the global score rising from 3/5 to 4/5. At the regional level, Northern Africa and Western Asia reflect this leap, while Central and Southern Asia reduced their regional score from 3/5 to 2/5, highlighting that efforts there need to be redoubled and that there is no room for complacency.

Sustainable fisheries accounted for approximately 0.1% of global GDP in 2017, while in certain regions and in LDCs they contributed to more than 0.5% of GDP. The sustainable management of fish stocks remains critical for ensuring that fisheries continue to generate economic growth and support equitable development. The long-term impact of COVID-19 on fisheries poses significant challenges that threaten to undermine sustainable stock management and profitability.

On average, only 1.2% of national research budgets were allocated for ocean science between 2013 to 2017, with percentages ranging from around 0.03% to 9.5%. This is a small proportion compared to the modestly estimated $1.5 trillion contribution of the ocean to the global economy in 2010.

Overall, many States have ratified or acceded to the 1982 UN Convention on the Law of the Sea (168 parties) and its implementing agreements (150 parties for the 1994 Part XI Agreement and 91 parties for the 1995 UN Fish Stocks Agreement). Many States have implemented these instruments through legal, policy and institutional frameworks, but this remains an area for further progress in several developing countries, in particular LDCs.

Oceans and fisheries continued to support the global population’s economic, social and environmental needs while suffering unsustainable depletion, environmental deterioration and carbon dioxide saturation and acidification. Current efforts to protect key marine environments and small-scale fishers and invest in ocean science are not yet meeting the urgent need to protect this vast, fragile resource.

The ocean absorbs around 23 per cent of the annual emissions of anthropogenic carbon dioxide to the atmosphere, helping to alleviate the impacts of climate change on the planet, however, resulting in a decreasing pH and acidification of the ocean. A new ocean acidification data portal shows an increase in variability in pH and the acidity of the oceans by 10 to 30 per cent in the period 2015–2019.

The sustainability of global fishery resources continues to decline, though at a reduced rate, with the proportion of fish stocks within biologically sustainable levels at 65.8 per cent in 2017, down from 90 per cent in 1974 and 0.8 percentage point lower than 2015 levels.

As at December 2019, more than 24 million km2, or 17 per cent, of waters under national jurisdiction (up to 200 nautical miles from shore) were covered by protected areas, more than doubling in extent since 2010. Much of the coverage is concentrated in Oceania and Latin America and the Caribbean.

As at February 2020, the number of parties to the Agreement on Port State Measures to Prevent, Deter and Eliminate Illegal, Unreported and Unregulated Fishing –  the first binding international agreement that specifically targets illegal, unreported and unregulated fishing – increased to 66 (including the European Union) from 58 in the previous year, and nearly 70 per cent of countries reported scoring high on the implementation thereof.

The contribution of sustainable marine capture fisheries remained stable at the global level, with regional variation, representing the largest contribution to the GDP in Pacific small island developing States and least developed countries, averaging 1.55 and 1.15 per cent, respectively, in 2011 to 2017.

The expansion of protected areas for marine biodiversity and existing policies and treaties that encourage responsible use of ocean resources are still insufficient to combat the adverse effects of overfishing, growing ocean acidification due to climate change and worsening coastal eutrophication. As billions of people depend on oceans for their livelihood and food source and on the transboundary nature of oceans, increased efforts and interventions are needed to conserve and sustainably use ocean resources at all levels.

Advancing the sustainable use and conservation of the oceans continues to require effective strategies and management to combat the adverse effects of overfishing, growing ocean acidification and worsening coastal eutrophication. The expansion of protected areas for marine biodiversity, intensification of research capacity and increases in ocean science funding remain critically important to preserve marine resources.

Goal 14. Conserve and sustainably use the oceans, seas and marine resources for sustainable development 18. The increasingly adverse impacts of climate change (including ocean acidification), overfishing and marine pollution are jeopardizing recent gains in protecting portions of the world’s oceans.