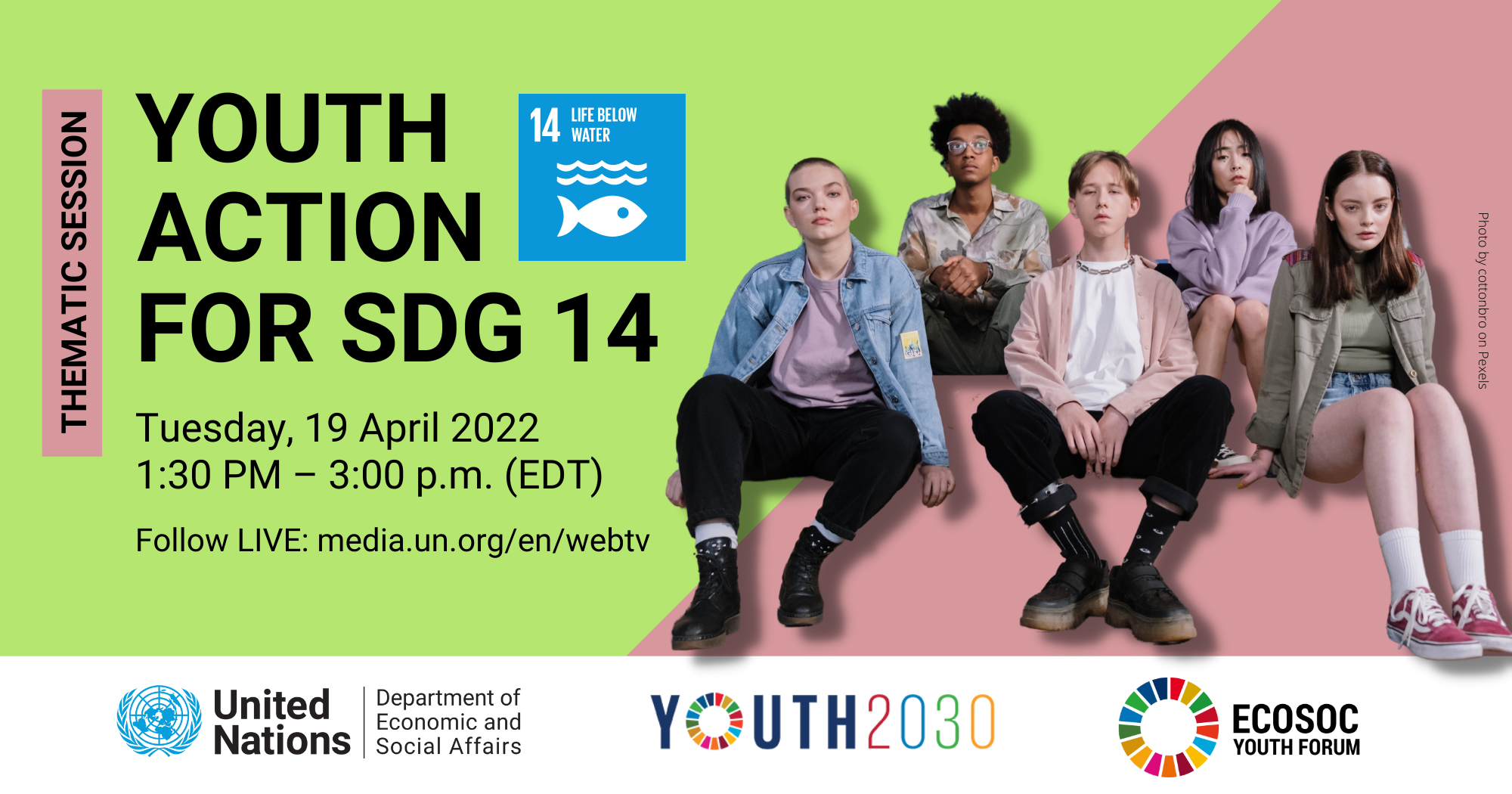 The 2022 ECOSOC Youth Forum is convened by the President of ECOSOC and is co-organized by the UN Department of Economic and Social Affairs (UN DESA) and the Office of the Secretary General's Envoy on Youth (OSGEY), in collaboration with the United Nations Inter-Agency Network on Youth Development (IAYND) and Major Group on Children and Youth (MGCY) and the International Coordination Meeting of Youth Organizations (ICMYO).

Focusing this year on, "COVID-19 recovery: Youth taking action for a sustainable future", the Forum is an annual event that provides young people from around the globe the chance to engage in dialogue with UN Member States and other international actors. This year, the Forum will specifically be focusing on the impact that COVID-19 has had on youth and global efforts to achieve the Sustainable Development Goals (SDGs) in this Decade of Action. This two-day event will feature plenary sessions and interactive thematic and regional based discussions. Participants will have the opportunity to share best practices, lessons learned, and potential innovative solutions directly with country representatives, youth from around the world, and other actors such as Non-Governmental Organizations (NGOs).

The Youth Forum will specifically be reviewing the progress of SDG 4 on quality education, SDG 5 on gender equality, SDG 14 live below water, SDG 15 life on land, and SDG 17 on partnership for the goals.

Convened by the United Nations General Assembly and co-hosted by the Governments of Kenya and Portugal, the “United Nations Conference to Support the Implementation of Sustainable Development Goal 14: Conserve and sustainably use the oceans, seas and marine resources for sustainable development” will be held from 27 June to 1 July in Lisbon, Portugal, under the overarching theme: “Scaling up ocean action based on science and innovation for the implementation of Goal 14: stocktaking, partnerships and solutions”.

SDG 14 will also be under in-depth review at the 2022 High Level Political Forum on Sustainable Development (HLPF) to be convened under the auspices of the ECOSOC from 5 to 15 July 2022.

In addition, several other key UN intergovernmental processes unfolding this year will have a direct impact on the Ocean and its well-being, including the resumed session of the fifth UN Environment Assembly that took place from 28February to 2 March that decided to forge a legally binding agreement; the Special Session of the UN Environment Assembly UNEP@50 held from 3 to 4 March where the commitment to environment cooperation was affirmed; the Stockholm+50 international meeting to be held from 2 to 3 June; the COP27 of UNFCCC from 7 to 18 November, and part 2 of the COP15 of the Convention on Biodiversity planned to take place in the third quarter this year.

UN DESA, the Oceans Youth Constituency of the Major Group of Children and Youth, UNEP and UN Global Compact have organized a special session on Youth Action for SDG 14, given the critical role that young people have in the conservation and sustainable use of oceans, seas and marine resources for sustainable development. This session provided a unique platform for youth to showcase ideas, recommendations, innovations, youth-led solutions and actions, to “Save our ocean, Protect our future”. It also contributed to raising awareness among youth of the 2022 United Nations Ocean Conference in late June and the review of SDG 14 at 2022 High-level Political Forum on Sustainable Development (HLPF), the implementation of the Decade of Ocean Science for Sustainable Development, as well as other related processes. 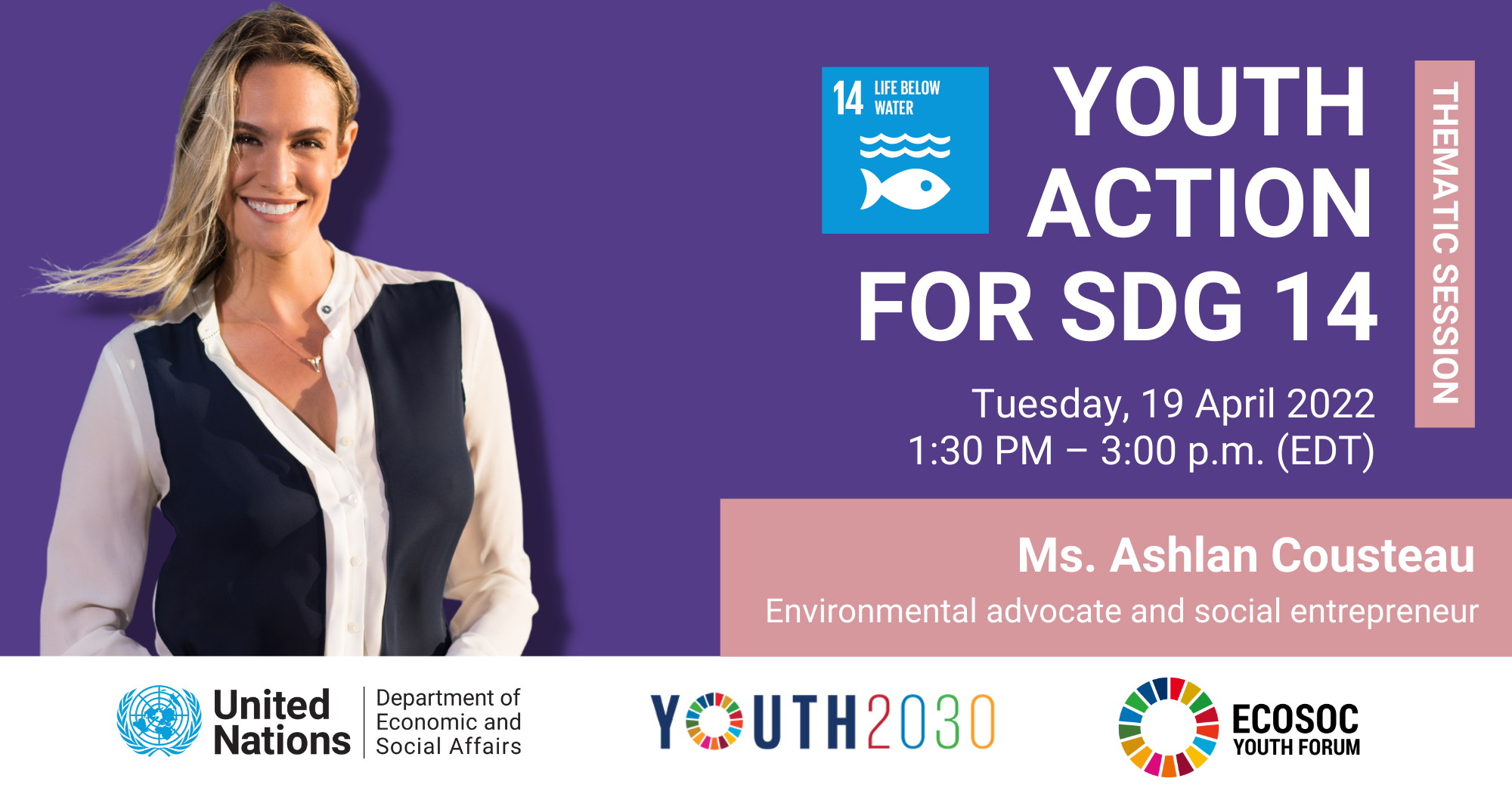 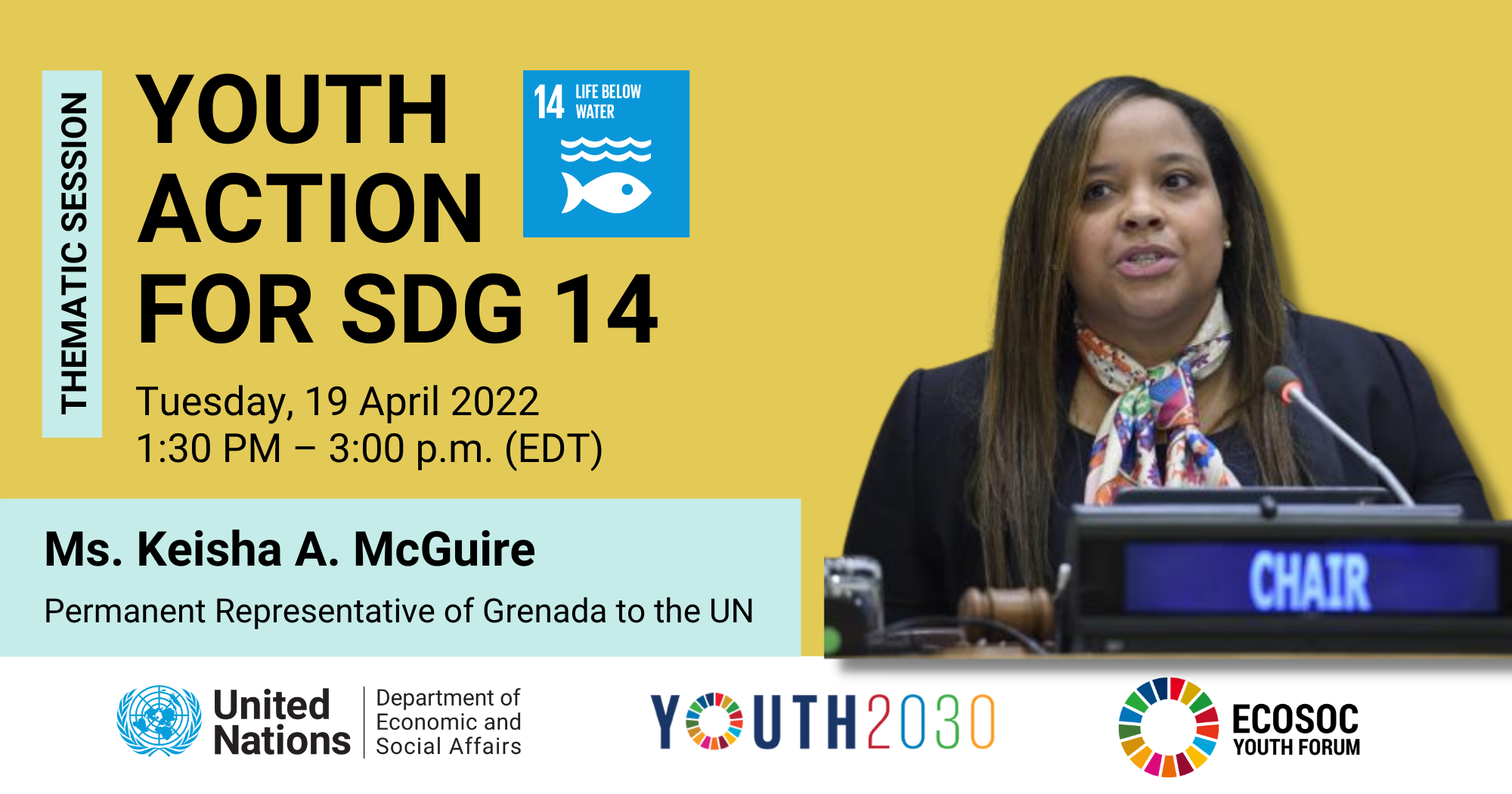 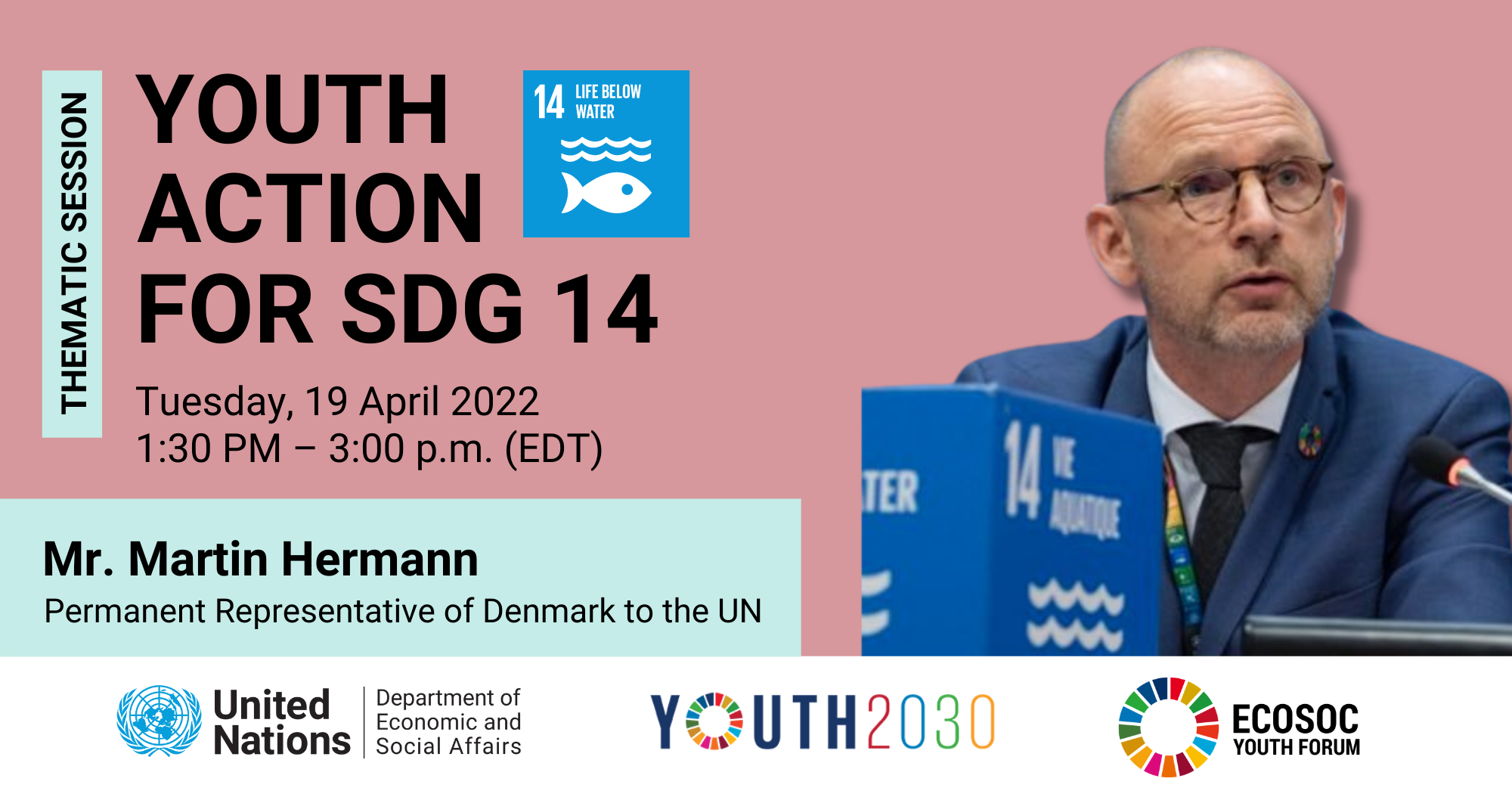 Watch the LIVESTREAM on UN WebTV

Please find the PowerPoint presentation under the "documentation" tab.

To solve the myriad environmental crisis that we face, Ashlan knows that education is key and works with EarthEcho International (founded by her husband Philippe), a leading environmental education organization that is building a global youth movement to restore and protect the ocean and has engaged over 2 million youth in 146 countries since its founding 16 years ago

Gator Halpern is the Co-founder and President of Coral Vita, a mission-driven company working to restore our world's dying coral reefs. He is a lifelong entrepreneur who is passionate about starting projects that can help create a better harmony between society and nature. Before founding Coral Vita, he worked on development projects in Brazil, Peru, and South Africa. During his career, he has helped distribute millions of baby fish to villages in the Amazon, he's analyzed the environmental effects of land-use change projects on three different continents, and worked for the World Wildlife Fund Global Marine Program. Gator’s work has earned him several awards including being named a United Nations Young Champion of the Earth, a Forbes 30 Under 30 Social Entrepreneur, and an Earthshot Prize winner. He lives and works in the Bahamas, where Coral Vita operates the world’s first commercial land-based coral farm for reef restoration.

Brandon’s intention as an executive, public speaker, poet, and teacher is to help environmentally-minded individuals navigate the intertwined imperatives of ecological innovation and self-realization. In his tenure at Sustainable Ocean Alliance, Brandon has carried this mission forth by empowering the next generation of leaders and entrepreneurs with the training, resources and networks they need to build ocean-healing solutions and reach their full potential as human beings. In this capacity, Brandon has spearheaded international leadership summits in collaboration with foreign governments, concepted a grant program that has funded grassroots projects in 60+ countries, and provided integral coaching for young leaders worldwide. Outside of SOA, Brandon serves on the Advisory Board for several impact-oriented organizations while also working to complete his Mindfulness Meditation Teacher Certification training. Brandon earned an M.B.A. in Sustainable Management at the Presidio Graduate School and holds a B.A. in International Affairs from The George Washington University.

Pamela Tapia is a biologist and scientific diver committed to the conservation of biodiversity in the seas and coasts. She works to integrate and promote transformative change, the inclusion of local communities as well as citizen science, all with a gender perspective. She was a member of the official Mexican Delegation as a representative of Civil Society Organizations to the Convention on Biological Diversity (CBD) at the SBSTTA-3, SBI-3, and OEWG-3 meetings in Geneva, Switzerland, 2022. Pamela has actively participated in the revision of the documents on seas and coasts as well as in the revision of the Gender Action Plan. She has participated in oceanographic research campaigns monitoring marine invertebrates associated with sandy seabeds and corals in the Gulf of Mexico. She also accompanied and provided technical support in the ARMS (Artificial Reef Monitoring System) project in the Caribbean and Gulf of Mexico.

Lefteris comes from a long line of Greek professional fishermen. During the Greek economic crisis, he co-founded Enaleia, an organization with a vision to make the marine ecosystem sustainable. Enaleia has created the first school for professional fishing in Greece and a wide-scale plastic clean-up, the Mediterranean CleanUp, through working with a thousand fishers, where the collected waste is integrated into the circular economy. Lefteris has been awarded as the UN European Young Champion of the Earth 2020. He is a graduate of the Athens University of Economics and Business.

For six years, Stephanie worked as Lead Researcher at the Centre for Maritime Law and Security Africa. While at the Centre, she served ad-hoc expert in the finalisation of draft annexes to the Lomé Charter and co-author of a comprehensive Maritime Legal and Institutional Review for Ghana.

Stephanie Schandorf has also contributed expertise to a number of other ocean governance fora, including the First Meeting of the Ad Hoc Working Group of the Abidjan Convention to Study Aspects of the Conservation of the ABNJ in Cape Town, South Africa. Stephanie is the founder of Sustainability Tribe, a non-profit, social media movement aimed at enhancing ocean literacy amongst youth. She is also the Associate Director of the Gulf of Guinea Maritime Institute, an NGO dedicated to advancing ocean governance in Africa.

Stephanie has an MSc in Defence and International Politics and is a member of Chatham House’s Common Futures Conversations.

H.E. Amb. Keisha A. McGuire is the Permanent Representative of Grenada to the United Nations, one of the two Co-Facilitators appointed by the President of General Assembly to oversee the preparatory process and intergovernmental consultations on the Political Declaration for the 2022 UN Ocean Conference.

Prior to her appointment as the Permanent Representative of Grenada, Ms. McGuire was an associate in the litigation department of Hughes Hubbard & Reed LLP from 2012 to 2016. Based in Miami, Florida, she represented clients in securities, product liability and complex commercial disputes. In 2006, and again from 2007 to 2011, Ms. McGuire was an associate at Hogan Lovells US LLP, representing domestic and international clients in securities, receivership, construction and aviation, among other areas. From 2005 to 2006, she was a law clerk in the Office of the University Council at Cornell University in Ithaca, New York, where she conducted statutory and case law research. Ms. McGuire holds a Doctor of Laws degree from Cornell University, in Ithaca, New York, and a Bachelor’s degree from the University of Miami, Florida, and an associate degree from Barbados Community College.

H.E. Amb. Martin Bille Hermann is the Permanent Representative of Denmark to the United Nations, one of the two Co-Facilitators appointed by the President of General Assembly to oversee the preparatory process and intergovernmental consultations on the Political Declaration for the 2022 UN Ocean Conference.

Before his latest appointment as the Permanent Representative of Denmark, Mr. Hermann was State Secretary for Development Policy at the Ministry of Foreign Affairs of Demark. From 2012 to 2014 he served as his country’s ambassador to Indonesia, a period during which he was also accredited to Timor-Leste and Papua New Guinea, in addition to acting as Denmark’s representative to the Association of Southeast Asian Nations (ASEAN). Among other positions, he was Head of the Asian and Pacific Ocean Department in the Ministry of Foreign Affairs from 2008 to 2012, Deputy Head of the Ministry’s Department for Development Policy from 2006 to 2008, and Deputy Head of the Danish embassy in Nepal from 2003 to 2006. From 1996 to 1999, he was a Programme Officer with the United Nations Development Programme (UNDP) in Bhutan. Mr. Hermann holds a master’s degree in development management from the London School of Economics and a master’s degree in economics from the University of Copenhagen.

Click here to view the full speakers' profiles with photos