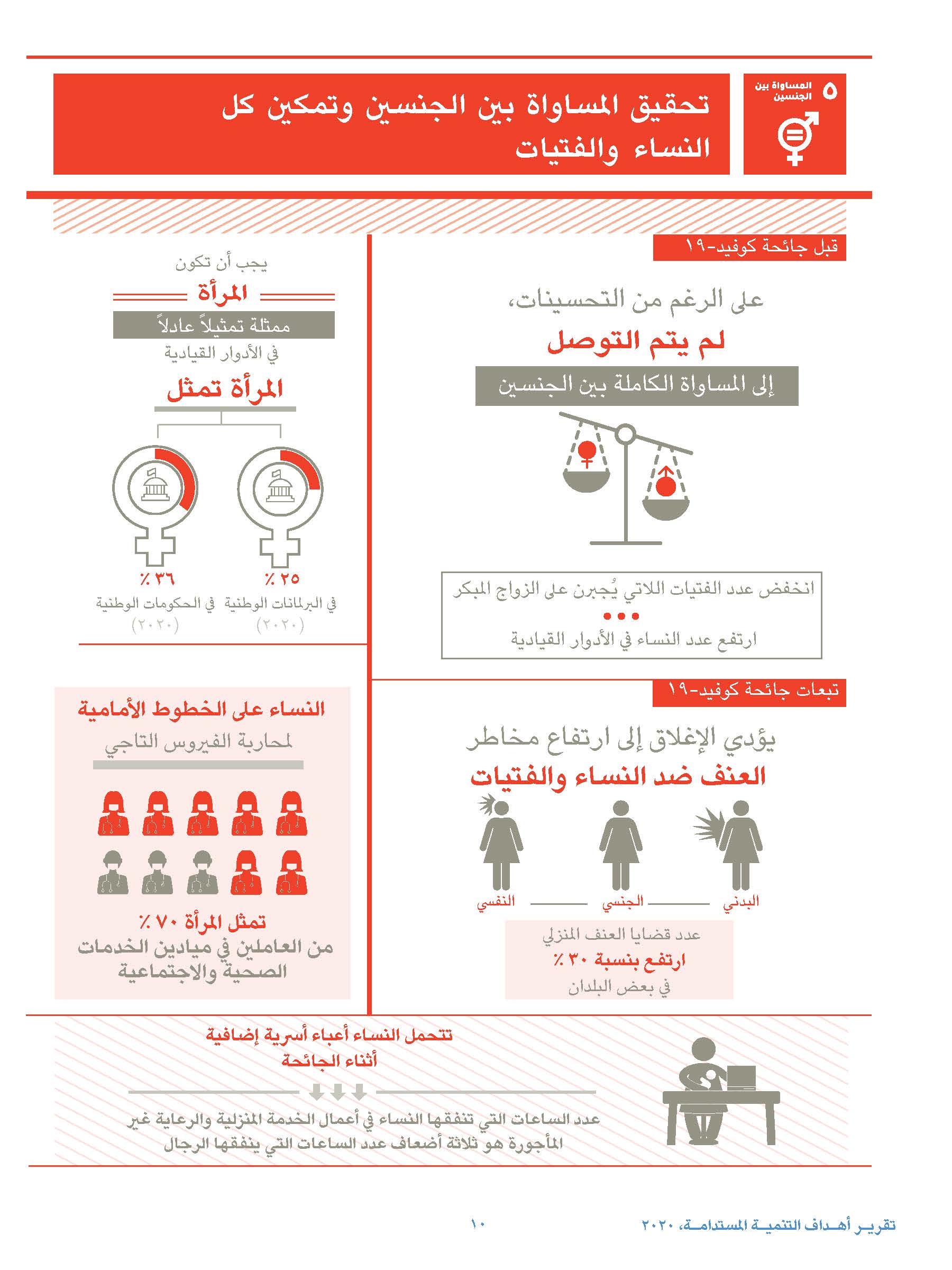 Eliminate all forms of violence against all women and girls in the public and private spheres, including trafficking and sexual and other types of exploitation

Eliminate all harmful practices, such as child, early and forced marriage and female genital mutilation

Undertake reforms to give women equal rights to economic resources, as well as access to ownership and control over land and other forms of property, financial services, inheritance and natural resources, in accordance with national laws

Enhance the use of enabling technology, in particular information and communications technology, to promote the empowerment of women

The socioeconomic impacts of the COVID-19 pandemic have adversely affected recent progress on gender equality: violence against women and girls has intensified, child marriage is expected to increase after declining in previous years, and increased care work at home is affecting women disproportionately. The pandemic has highlighted the need for swift action to address the gender inequality that remains pervasive globally and to get back on track for achieving gender equality. Women have played a critical role in the response to the pandemic as front-line health workers, caregivers, and managers and leaders of the response and recovery efforts. However, they remain underrepresented in critical leadership positions, and their rights and priorities are often not explicitly addressed in those efforts. The crisis presents an opportunity to reshape and rebuild systems, laws, policies and institutions in order to advance gender equality.

Discriminatory laws and legal gaps continue to prevent women from fully enjoying their human rights. According to data for 2020 from 95 countries and territories, more than half lacked quotas for women in the national parliament; 83 per cent included budgetary commitments to implement legislation addressing violence against women, although 63 per cent continued to lack rape laws based on the principle of consent; more than 90 per cent prohibited discrimination in employment on the basis of gender, yet almost half continued to restrict women from working in certain jobs or industries; and almost one quarter did not grant women equal rights to men for entering into marriage and initiating divorce proceedings.

New estimates based on surveys from the period 2000–2018 confirm that nearly 736 million women, or one in three, have been subjected to physical violence, sexual violence or both by a husband or intimate partner, or sexual violence by a non-partner, at least once in their lifetime from 15 years of age – a figure that has remained largely unchanged over the past decade. Intimate partner violence starts early, with nearly 24 per cent of adolescent girls 15 to 19 years of age and 26 per cent of young women 20 to 24 years of age who have ever had a partner or been married having experienced such violence already.

Over the past decade, the practice of child marriage has declined significantly, with the global proportion of young women who were married as children decreasing by 15 per cent, from nearly one in four in 2010 to one in five in 2020. As a result of this progress, the child marriages of some 25 million girls have been averted. However, the profound effects of the pandemic are threatening this progress, with up to 10 million additional girls at risk of child marriage in the next decade as a result of the pandemic.

According to data from 31 countries and territories in which the practice is concentrated, at least 200 million women and girls have been subjected to female genital mutilation. Despite some progress, there are still countries and territories in which at least 9 in 10 girls and women ranging from 15 to 49 years of age have been subjected to such mutilation, making the harmful practice almost universal.

The latest data collected on 90 countries and territories between 2001 and 2019 indicate that, on an average day, women spend about 2.5 times as many hours as men on unpaid domestic work and care work.

By 2019, women accounted for nearly 39 per cent of the global labour force, but held only 28.3 per cent of managerial positions, a rise of 3 percentage points since 2000. The disproportionate impact of the pandemic on women in the workforce, and female entrepreneurs in particular, threatens to roll back the little progress made in reducing the global gender gap in managerial positions.

Data for 2020 from 36 countries and territories on national legal framework guarantees for women’s equal rights to land ownership show that substantial improvement has been achieved in establishing equal inheritance rights (69 per cent) and establishing spousal consent requirements for land transactions (61 per cent), while progress is lagging in areas including land registration, customary law, and women’s representation in land governance.

Empowering more women with mobile telephones has been shown to accelerate social and economic development. However, in the 66 countries and territories with data for the period 2017–2019, average mobile telephone ownership was 8.5 percentage points lower for women than for men.

In 2018, 81 per cent of the 69 countries and territories for which there are data needed to improve their systems for tracking budget allocations for gender equality. In the context of the COVID-19 pandemic, strengthening these systems through the comprehensive use of gender-budgeting tools will contribute to the better targeting of resources for a gender-responsive recovery.