Proposed global roadmap shows how universal access to sustainable energy can be achieved by 2030, transforming the lives of millions 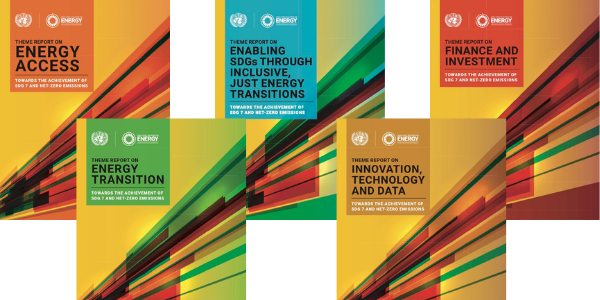 Proposed global roadmap shows how universal access to sustainable energy can be achieved by 2030, transforming the lives of millions

to accelerate access and transition to clean energy by 2030

New York, 18 June 2021 – Everyone in the world could have access to clean, affordable energy within the next nine years if countries modestly increase investments, according to new reports released today, in advance of a major ministerial meeting on 21-25 June where countries and businesses will begin to announce energy plans for the decade.

Annual investments of around $35 billion could bring electricity access for 759 million people who currently lack it, and $25 billion a year can help 2.6 billion people gain access to clean cooking between now and 2030. The required investment represents only a small fraction of the multi-trillion-dollar global energy investment needed overall, but would bring huge benefits to one-third of the world’s population.

The recommendations on energy access are part of a proposed global roadmap with concrete actions to achieve clean, affordable energy for all by 2030 and net zero emissions by 2050, launched by the United Nations today, to set the groundwork for a large-scale mobilization of commitments this year.

National and city governments, foundations and businesses are expected to start announcing significant commitments in the form of “Energy Compacts” at Ministerial Forums to be held 21-25 June, driving action towards a High-level Dialogue on Energy, a summit to be convened by the UN in September. Major Energy Compact commitments and partnerships for clean electricity access and cooking solutions are among those expected to be announced during the June Forums, which are co-hosted by thirty Global Champion countries.

“The ambitious energy compacts being put forward by countries, businesses, cities, and many other partners are a spark of hope for achieving a just transition towards sustainable energy and for improving the lives of millions of people in the process,” said Dialogue Secretary-General Liu Zhenmin, UN Under-Secretary-General for Economic and Social Affairs. “But this is only the beginning and we need much more commitment and concrete action at this year’s High-level Dialogue on Energy to get where we need to be by 2030.”

The proposed roadmap, which will inform the High-level Dialogue on Energy in September and be considered in the political statement resulting from the summit, is based on reports submitted by five Technical Working Groups that have brought together over 160 experts since March, co-led by 16 UN and international organizations, grouped by thematic focus. The five focus areas are: energy access; energy transition; enabling the Sustainable Development Goals (SDGs) through inclusive, just energy transitions; innovation, technology and data; and finance and investment.

A system overhaul to speed up energy transition

In order to achieve the SDGs and Paris Agreement targets, energy transition must become a transformational effort, a system overhaul, the proposed roadmap suggests. The reports recommend a rapid scale-up of available solutions to reach 8000 GW of renewables by 2030 from 2800 GW currently, and to increase the average annual rate of energy efficiency improvement from the current 0.8 to 3 per cent. By 2025, 100 countries should establish targets for 100% renewable-based power, and there should be no new coal plants in the pipeline globally. The share of fossil fuels in the global mix would fall from the current 60 per cent to 30 per cent by 2030.

The proposed roadmap also calls for countries to phase out coal by 2030 in wealthier countries that are members of the Organisation for Economic Co-operation and Development (OECD), and by 2040 in non-OECD countries, recognizing that many developing countries will need support for this process. By 2050, 92 per cent of power would come from renewable technologies.

“The energy revolution is underway, but 759 million people still live without electricity and the opportunities it provides,” said Achim Steiner, Administrator of the UN Development Programme and Co-Chair of the High-level Dialogue. “It is one of the most blatant examples of inequality in our world today. Affordable clean energy access for all is the foundation for achieving a global energy transition that is fast and fair.”

A just and inclusive transition to achieve the SDGs

“At the upcoming Ministerial Forums, we will see bold commitments put forward as Energy Compacts as well as large financial commitments from partner institutions, and we need more of them, to ensure we leave no one behind and that we transition in a just and inclusive manner to net zero by 2050,” said his Co-Chair, Damilola Ogunbiyi, Special Representative of the UN Secretary-General on Sustainable Energy for All. “This is an opportunity of our lifetime to provide universal energy access by leveraging new partnerships and technologies, and funding innovations that can create a cleaner, brighter and more equitable economic future.”

The reports indicate that a just and inclusive energy transition can create 30 million new jobs in sustainable energy by 2030 and 42 million by 2050. They call for ensuring gender equality in all aspects of energy transition, including more women taking on roles as engineers, policymakers and entrepreneurs. The reports argue that every country and region should integrate achievement of the Sustainable Development Goals as a guiding framework for energy transition strategies. Policymakers must explicitly prioritize the needs of vulnerable groups in order to enable an inclusive and just energy transformation and achievement of all the SDGs.

On the role of innovation and technology, the proposed roadmap calls for scaling up research and development (R&D) and investment to align with the 2030 and 2050 goals, recognizing that private energy R&D funding has increased 40 per cent since 2010. Global investment in renewable energy capacity reached around $300 billion in 2019, with only 5 per cent invested in Africa, home to 82 per cent of those living without energy access.

The reports also acknowledge that many technologies for achieving the 2030 and 2050 goals exist but require innovations that accelerate and scale-up their deployment. In addition, the reports call for increased financing and investment to address lack of finance for local energy innovations in developing countries. Data systems need to be enhanced to better inform energy policies and direct investment decisions.

A tripling of clean energy investment by 2030

Recommendations on financing and investment needed to achieve the 2030 and 2050 energy targets call for a tripling of clean energy investment to $5 trillion per year by 2030. The trillions of dollars in investments needed can be supported by scaling up the use of blended finance mechanisms and multilateral portfolio guarantees coupled with results-based financing, de-risking instruments and commercial financing, as well as reducing regulatory barriers to attract private investment.

The Energy Compacts announced at the June Forums will be made public and tracked in an online database, with annual reporting through 2030. It is expected that many more commitments will be announced towards the September High-level Dialogue from national and local governments, businesses, foundations and civil society organizations.

To follow the Ministerial Thematic Forums, the livestream of the ministerial segment will be available every day, 21-25 June, 9:00-11:00 am (New York time) at webtv.un.org.  The grand opening on 21 June, 9:00am, will include a message by UN Secretary-General António Guterres. A summary of the proposed global roadmap will be presented during the ministerial segment each day according to theme. See the full programme for details.  Highlights of Energy Compacts launched will be posted on the Dialogue website.  Daily meeting summaries with video and audio clips will be available online from IISD.

For more detail on the proposed global roadmap and recommendations, see the executive summaries of each report by theme, as well as media contacts for the co-lead organizations, online:

#3  Enabling the SDGs through Inclusive, Just Energy Transitions, in collaboration with UN DESA,