The effects of demographic pressure and unsustainable land management practices on land degradation and desertification are being exacerbated worldwide due to the effects of climate change, which include (but are not limited to) changing rainfall patterns, increased frequency and intensity of drought and floods, rising temperatures, and profound ecological shifts.
As a consequence, populations’ abilities to generate livelihoods are limited, particularly in the drylands. Where land users are exposed and sensitive to changes and able to adapt, through flexibility and mobility in the use of the natural capital, resilience can be built. When they cannot adapt, land users become more vulnerable, which can lead to any number of undesirable consequences including increased poverty, malnutrition, outmigration, political insecurity, and conflict.
View PDF: 19273sc.Conclusions-A3-08.04.2015-UNCCD.pdf 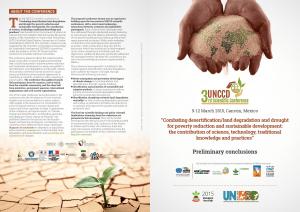