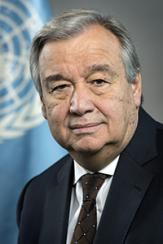 Having witnessed the suffering of the most vulnerable people on earth, in refugee camps and in war zones, the Secretary-General is determined to make human dignity the core of his work, and to serve as a peace broker, a bridge-builder and a promoter of reform and innovation.

Prior to his appointment as Secretary-General, Mr. Guterres served as United Nations High Commissioner for Refugees from June 2005 to December 2015, heading one of the world’s foremost humanitarian organizations during some of the most serious displacement crises in decades. The conflicts in Syria and Iraq, and the crises in South Sudan, the Central African Republic and Yemen, led to a huge rise in UNHCR’s activities as the number of people displaced by conflict and persecution rose from 38 million in 2005 to over 60 million in 2015.

Before joining UNHCR, Mr. Guterres spent more than 20 years in government and public service. He served as prime minister of Portugal from 1995 to 2002, during which time he was heavily involved in the international effort to resolve the crisis in East Timor.

As president of the European Council in early 2000, he led the adoption of the Lisbon Agenda for growth and jobs, and co-chaired the first European Union-Africa summit. He was a member of the Portuguese Council of State from 1991 to 2002.

From 1981 to 1983, Mr. Guterres was a member of the Parliamentary Assembly of the Council of Europe, where he chaired the Committee on Demography, Migration and Refugees.

For many years Mr. Guterres was active in the Socialist International, a worldwide organization of social democratic political parties. He was the group’s vice-president from 1992 to 1999, co-chairing the African Committee and later the Development Committee. He served as President from 1999 until mid-2005. In addition, he founded the Portuguese Refugee Council as well as the Portuguese Consumers Association DECO, and served as president of the Centro de Acção Social Universitário, an association carrying out social development projects in poor neighbourhoods of Lisbon, in the early 1970s.

Mr. Guterres is a member of the Club of Madrid, a leadership alliance of democratic former presidents and prime ministers from around the world.

Mr. Guterres was born in Lisbon in 1949 and graduated from the Instituto Superior Técnico with a degree in engineering. He is fluent in Portuguese, English, French and Spanish. He is married to Catarina de Almeida Vaz Pinto, Deputy Mayor for Culture of Lisbon, and has two children, a stepson and three grandchildren. 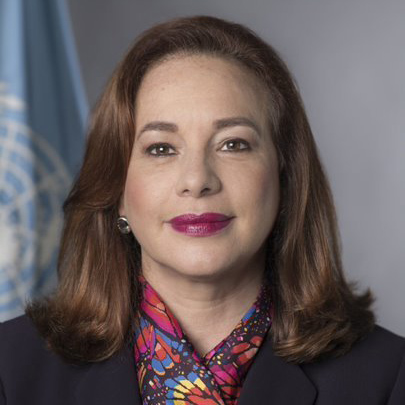 In those capacities she coordinated the Sectorial Council on Foreign Policy and Promotion, which includes the Ministries of Tourism, Culture and Heritage, Foreign Trade, and the Environment. Ms. Espinosa Garcés was Chair of the Group of 77 and China until January 2018, and also served as Chair of the Andean Community. At the fifty-sixth session of the Commission on the Status of Women, she promoted the adoption of the resolution presented by Ecuador entitled “Indigenous women: key actors in poverty and hunger eradication”. She was a chief negotiator at the sixteenth and seventeenth Conferences of the Parties of the United Nations Framework Convention on Climate Change and at the Rio+20 United Nations Conference on Sustainable Development, where she facilitated the adoption of key elements in the outcome document entitled “The future we want”.

As Minister of National Defence of Ecuador, Ms. Espinosa Garcés participated in debates on women, peace and security, and promoted the creation of the South American Defence School of the Union of South American Nations, among other initiatives.

In 2008, she was the first woman to become Permanent Representative of Ecuador to the United Nations in New York. During that posting, she cofacilitated the Working Group on the revitalization of the work of the General Assembly at its sixty-third session. She also led efforts at the global level towards the achievement of the Millennium Development Goals.

As Permanent Representative to the United Nations in Geneva, she led and supported various negotiation processes at the Human Rights Council. She chaired the work of the Community of Latin American and Caribbean States (CELAC) in Geneva, and at the twenty-first Conference of the Parties (COP 21) on Climate Change in Paris.

Ms. Espinosa Garcés was Special Adviser to the President of the Constituent Assembly that drafted the Constitution of Ecuador in 2008 and Regional Director (South America) and Adviser on Biodiversity (Geneva) at the International Union for Conservation of Nature. In both positions, she worked for approximately 10 years on various initiatives at WIPO and WTO; participated in negotiations on intellectual property, and traditional and ancestral knowledge; and supported the Andean Community and the Amazon Cooperation Treaty Organization on strategic management and sustainable development.

Before beginning her political and diplomatic career, Ms. Espinosa Garcés was Associate Professor and Researcher at the Facultad Latinoamericana de Ciencias Sociales Sede Ecuador. During her time in academia, she received scholarships and grants from the Latin American Studies Association, the Ford Foundation, the Society of Woman Geographers and the Rockefeller Foundation towards her research in the Amazon. She also received awards from the German Agency for Cooperation, Deutsche Gesellschaft fϋr Technische Zusammenarbeit (GTZ) and Natura Foundation for her research work.

Ms. Espinosa Garcés has written over 30 academic articles about the Amazon region, culture, heritage, sustainable development, climate change, intellectual property, foreign policy, regional integration, defence and security. She has studies from Rutgers University. She holds a master’s degree in social sciences and Amazonian studies and a postgraduate diploma in anthropology and political science from the Facultad Latinoamericana de Ciencias Sociales Sede Ecuador, as well as a bachelor’s degree in applied linguistics from the Pontificia Universidad Católica del Ecuador. 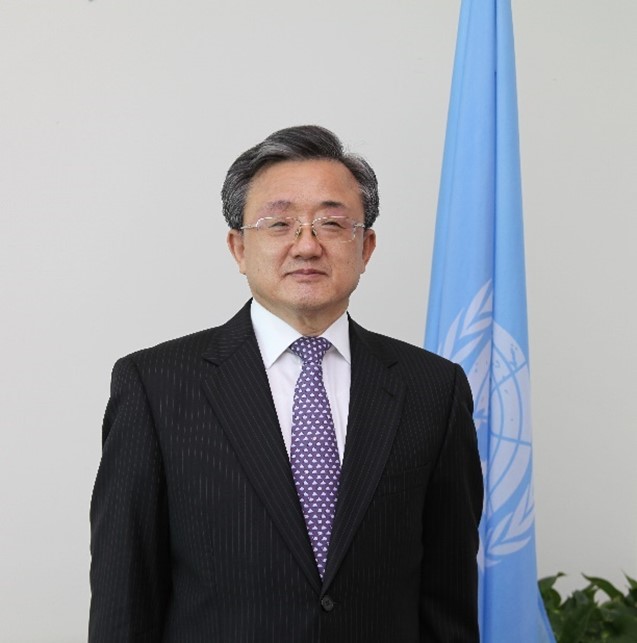 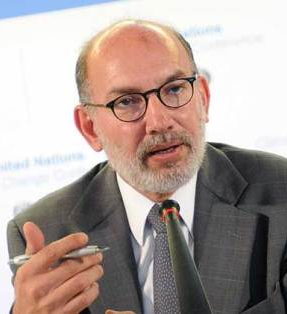 Luis Alfonso de Alba of Mexico is the Secretary-General’s Special Envoy for the 2019 Climate Summit. Before his appointment, in November 2018, Mr. de Alba was Undersecretary for Latin America and the Caribbean in Mexico’s Ministry of Foreign Affairs since September 2017. Appointed Ambassador in 2001, he brings distinguished experience as Permanent Representative of Mexico to the Organization of American States, to the International Organizations in Vienna, to the United Nations in New York and to the United Nations Office and other International Organizations in Geneva, among other postings.

As his country’s Special Representative for Climate Change, Mr. de Alba led the negotiations for the 2010 United Nations Climate Change Conference (COP16) in Cancún, Mexico. He has held several elected positions at the United Nations, including Vice-President of the Economic and Social Council (2012) and first President of the Human Rights Council in Geneva (2006-2007). A diplomat since 1983, he undertook various other assignments in Mexico’s Foreign Ministry.

Born in 1957, Mr. de Alba holds a degree in international relations from the Institut d´Étude des Relations Internationales in Paris.