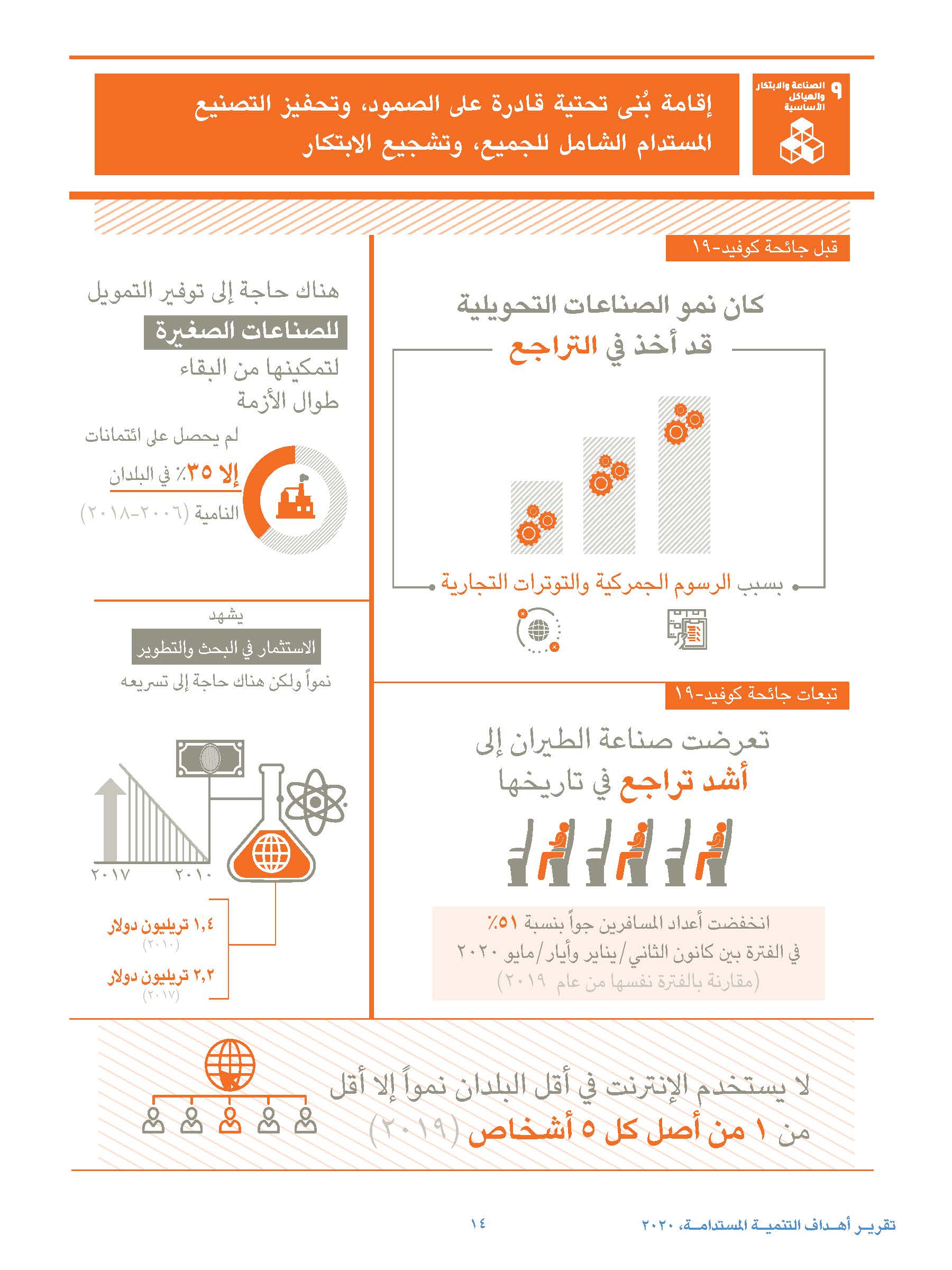 Develop quality, reliable, sustainable and resilient infrastructure, including regional and transborder infrastructure, to support economic development and human well-being, with a focus on affordable and equitable access for all

Increase the access of small-scale industrial and other enterprises, in particular in developing countries, to financial services, including affordable credit, and their integration into value chains and markets

By 2030, upgrade infrastructure and retrofit industries to make them sustainable, with increased resource-use efficiency and greater adoption of clean and environmentally sound technologies and industrial processes, with all countries taking action in accordance with their respective capabilities

In the year before the COVID-19 pandemic triggered the greatest economic crisis in decades, manufacturing value added had seen the slowest year-on-year growth rate since 2012, primarily because of tariff and trade tensions between the most dominant economies. The pandemic has hit the manufacturing and transport industries hard, causing job losses and declining incomes for workers in those sectors. The crisis poses unprecedented challenges for global value chains by disrupting both the supply of and the demand for goods. Small-scale industries have been severely affected, and many continue to face existential challenges. However, the COVID-19 crisis also offers opportunities to foster industrialization and bring groundbreaking technologies to developing countries.

According to data from 2018 and 2019 on the 25 countries and territories in Africa, Asia, South America, Central Asia and the Middle East for which the Rural Access Index of the World Bank was updated using a spatial method, almost 300 million out of 520 million rural dwellers still lack reliable access to roads.

Growth in maritime freight volumes and global container port traffic weakened in 2019, expanding at the marginal rates of 0.5 and 2 per cent, respectively, compared to 2018. As a result of the COVID-19 pandemic, the volume of international maritime freight is expected to have fallen by 4.1 per cent and global container port traffic by 2.1 per cent in 2020.

In 2019, 13.7 per cent of global workers, or 454 million people, were employed in manufacturing, one of the sectors hardest hit by the pandemic. Across 49 countries and territories with data, manufacturing employment declined by an average of 5.6 and 2.5 per cent in the second and third quarters of 2020, respectively, compared to the same periods in 2019.

Small-scale industries have been significantly affected by the pandemic, and many continue to face existential challenges. According to survey data for the period from 2006 to 2020, 29.3 per cent of small-scale entrepreneurs benefited from loans or lines of credit before the crisis, with some regional differences. Only 15.7 per cent of small-scale industries in sub-Saharan Africa received those forms of credit, compared to 44 per cent in Latin America and the Caribbean.

Globally, there has been an increase in the number of researchers per million population from 1,022 in 2010 to 1,235 in 2018, ranging from 3,847 in Europe and Northern America to only 99 in sub-Saharan Africa. In addition, women represented only 30.5 per cent of global researchers in 2018.

Total official flows for economic infrastructure in developing countries reached $63.6 billion in 2019, an increase of 39.6 per cent in real terms since 2010. The main sectors assisted were transport ($21.3 billion), and banking and financial services ($15.3 billion).

In 2018, the share of medium- and high-technology manufacturing in total manufacturing was 49 per cent in developed regions and 41.4 per cent in developing regions, compared to only 8.9 per cent in the least developed countries. The pandemic affected different industries unequally. Medium- and high-technology industries, such as the pharmaceutical, computer, electronics and automotive sectors, have recovered faster from the crisis than industries involving a lower technological intensity.

The roll-out of mobile broadband networks slowed in 2020. Almost 85 per cent of the global population was covered by a 4G network at the end of 2020, following a twofold increase in coverage since 2015. However, annual growth has been slowing gradually since 2017, with the result that coverage in 2020 was only 1.3 percentage points higher than in 2019.